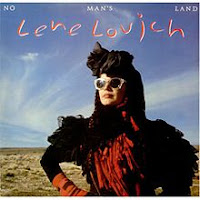 This month marks the thirtieth anniversary of the release of No Man's Land, the third full length studio album by American-born and England-based singer Lene Lovich. The 1982 release generated a pair of singles and reunited her with Thomas Dolby for one of the tracks.


Side one begins with "It's You, Only You (Mein Schmerz)". This first single reached number 68 in the UK and number 51 on the US Billboard Hot 100. The song has an upbeat tempo with elements of a circus and a spaghetti western in it musically. The video features amazing costumes and a dramatic Euro-setting, perfect for this track about passion and desires.

"Blue Hotel", the second single, charted at number 100 in Denmark. The synthesizers on this one are pure new-wave confection. The lyrics counter those with feelings of loneliness and isolation, but promise of new beginnings.

"Faces" starts off in a quirky, moody way. The lyrics tell of a break-up and how the expression on a former lover’s face can become cold and unfeeling.

"Walking Low" takes on some sci-fi elements, setting up a beautiful and haunting post- apocalyptic tale.

"Special Star" closes out the side on an up-tempo note. A shorter version of it first appeared on the 1981 EP New Toy. The lyrics speak of wishing upon a light in the night sky, asking for strength and positive energy to endure daily hardships.

Side two starts with "Sister Video". Jimmie O'Neil who penned it also played synthesizer and provided vocals on the track.

"Maria" tells the tale of a hard-working woman who hides her pain and suffering.

"Savages" too first appeared on the New Toy EP. I really like the piano elements here by Dean Klevatt.

Dolby plays synthesizer on the closing track "Rocky Road", a song about the darker sides of the world - suffering, greed, cruelty. The music is very danceable though.

Lene Lovich falls into the same alternative category as Kate Bush and usually invokes a similar listener response (love it or hate it). I tend to like Lovich’s music. She was doing that quirky kind of stuff long before the likes of Cyndi Lauper or Lady Gaga. The tracks on No Man’s Land are a bit tough to find though - you really have to hunt around but it is worth the effort.
Posted by Martin Maenza at 4:30 AM