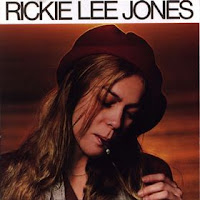 Today, we are going to look at the debut album from American singer-songwriter Rickie Lee Jones. Released on February 28th, 1979, Rickie Lee Jones went on to be a Platinum seller in the United States. Chart-wise, it went to number 3 on the US Billboard Hot 200 and number 18 on the UK charts.


Side one kicks off with the smash hit first single “Chuck E.’s in Love”. The song hit number 18 in the UK, number 79 on the US Billboard R&B chart and number 4 on the US Billboard Hot 100. The lyrics were loosely based on the rumors that Jones’ friend and fellow singer-songwriter Chuck E. Weiss was involved with someone. This is a five-star track in my iTunes library; I have always liked the saunter of the rhythm of this one, starting with the guitar opening and continued through with the percussion. It takes me back to warm summer days of my early teens, just hanging out by the pool and tanning. One of the guys that hung out was named Chuckie so we always said the song was about him.

The next track was the B-side to that first single. “On Saturday Afternoons in 1963” was one of two tracks recorded live in December of 1978 for the album. This gentle piano-based ballad, with orchestral arrangements by Nick DeCaro, reminds me of simpler times of my youth too.

“Night Train” keeps things light and acoustic while the subject matter deals with a mother on the run trying to keep her child.

“Young Blood”, the second single, peaked at number 40 on the US Billboard Hot 100. This is one of two collaborations with her friend Alfred Johnson. Don’t let that false ending pause fool you; there is a bit more of the jamming sounds that follow.

The fourth single from the album was “Easy Money”, a laid back song about a smooth, sultry con.

“The Last Chance Texaco”, the B-side to the third single, closes out the side. This one mixes the metaphor of servicing a car and repairing a broken relationship with relative ease.

Side two opens with “Danny’s All-Star Joint”, the third single. With a wonderful jazz sensibility, Jones lays down the double-entendres like a Vegas dealer dolling out hands. Tom Scott and Chuck Findley support her with a wall of horns.

“Coolsville” was the B-side to the second single. This one has a darker mood to it. I like how it just ends suddenly with no fade or anything, leaving you to ponder the fate of the song’s characters.

“Weasel and the White Boys Cool” is the other Jones/Johnson track. This one is the longest on the album, clocking in at exactly six minutes. I really like how Jones and the rest of the session musicians work this one out without any kind of rush or restraints.

The B-side to the fourth single was “Company”, another piano-based ballad. Jones really channels the torch song singers of the early part of the 20th century here, and her vocals are just lovely.

“After Hour (Twelve Bars Past Midnight)”, which closes the album, was also recorded live. It is just Jones at her piano. You really feel the loneliness in her voice here.

While this might not have been something I would have appreciated at age fourteen (how old I was when it was released), I can definitely get into this album as an adult with plenty of life experience under my belt. Rickie Lee Jones is one of those records that you just have to let go and lose yourself in. The singer paints such vivid, real and honest tales with her lyrics while the music welcomes you in like a blanket fresh out of the dryer on a cold winter’s day.
Posted by Martin Maenza at 4:30 AM