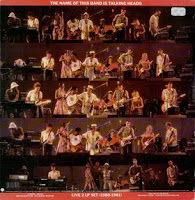 On March 24th of 1982, Talking Heads released their first live album. The Name of This Band Is Talking Heads was a double-album with seventeen tracks total. It charted at number 31 on the US Billboard Hot 200. It also reached number 32 in Sweden, number 22 in the UK and number 7 in New Zealand.


Side one features tracks recorded on November 17, 1977, in Maynard, Maine. They were part of a broadcast on WCOZ radio. These tracks mostly came from their debut album Talking Heads: 77.

From the simple opening of “New Feeling”, you can instantly tell this was a very intimate recording session. It has a very small club feel to it with a stripped down sound of just the four band members. I like the guitar work by David Byrne and Jerry Harrison here.

“A Clean Break”, a song about getting over a bad relationship, is up next.

“Don’t Worry About the Government” makes commentary on subsidized housing and an over-controlling administration.

“Pulled Up” is a bit more up-tempo sound thanks to Chris Frantz on drums.

“Psycho Killer”, a song about the thoughts of a serial murderer, closes out this segment. You can tell from the audience response that this was the song they were waiting for. I like how the band really kicks it into high gear at the end, to symbolize the pure insanity of the man’s mind.

Side two features tracks recorded on January 17, 1979, at the Capitol Theater in Passaic, New Jersey. The tracks here come from the group’s second album More Songs About Buildings and Food and third album Fear of Music.

“Artists Only” opens this segment. It has an oddly cerebral quality to it musically.

Frantz puts things in a predatory mode with the opening percussion on “Stay Hungry”. Byrne growls and howls like a wild beast.

“Air” gives the feeling of floating among the clouds at the start, thanks to Weymouth’s backing vocals.

“Memories (Can’t Wait)” closes this section out. It really lays down a funky sound, an indication where the band’s sound was evolving towards.

Sides three and four were taken from a number of concerts (in New York City, New Jersey, and Tokyo, Japan) from late 1980 to early 1981. The tracks come from albums two and three as well as their fourth album Remain in Light from 1980 (click here for that review). Unlike the first platter which featured just the quartet, this one features the fully expanded band that Talking Heads had grown into by this point.

Side three opens with “I Zimbra”, a track inspired by African cultural music.

“Drugs” has a trippy, extended opening and a stumbling sort of rhythm.

“Houses in Motion”, with its funky rhythm, is next. The extended version gives the band plenty of room to work out the groove.

“Life During Wartime” keeps things in an up-tempo mode to close out this side. I have always liked this track and the live version even more so.

Side four begins with a nearly seven minute long version “The Great Curve”. The mix with heavier electric guitar and the funk dance percussions is an interesting one that works fairly well.

A seven minute version of “Crosseyed and Painless”

The record closes with their version of Al Green’s “Take Me to the River”, clearly a crowd favorite based on this recording.

Admittedly, I did not truly get into Talking Heads until a year later when Speaking in Tongues was released and the group’s second live album Stop Making Sense a year after that. Still, this double-album does give a good overview of the band’s earlier work.
Posted by Martin Maenza at 4:30 AM