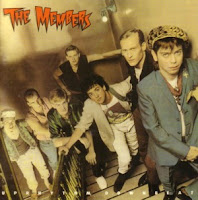 This month marks the thirtieth anniversary of Uprhythm, Downbeat, the third and final studio album from the British new-wave band known as the Members. In the UK, the record was released a year later under the title Going West.


Side one opens with “Working Girl”, a tale about a guy who is proudly living off a woman who works in a factory while he lays about the house. I like the vocal harmonies on the chorus.

“The Family” likens the group to being a mob of organized crime. It has a very danceable beat with funky guitar riffs and swinging horns.

“The Model” was a song by Kraftwerk released in 1978. The Members perform a cover here but replace the former’s electronic sounds with reggae rhythms and beats. These elements really make the song refreshing and different.

“Chairman of the Board” brings back the similar dance beat as the second track on this side. This one features some searing guitar solos too.

“Boys Like Us” is another up-beat track that celebrates the group’s free and easy lifestyle. The title of the album comes from a line in this one.

Side two begins with “Going West”. The horn sections really make this one for me; they really drive this dance track.

“Radio” is a celebration of listening to music at the time. I like the high energy and attitude.

“Fire (In My Heart)” is a song of love and passion.

“You and Me Against the World” slows things down with a track about running into a former lover and her new boyfriend.

“We, the People” closes the album with a up-tempo call for solidarity among the hard working blue collar populace.

While I was familiar with the first track on the album thanks to a Rhino Music new-wave collection I got in the 90’s, I did not stumble across the full Uprhythm, Downbeat album until 2009. It showed up on emusic.com and I decided to give it a shot; I was very pleased I did. I really like the Members sound on this record. It reminds me a bit of Heaven 17, the English Beat and early Spandau Ballet in a number of ways. Since then, this one has become one of my highly played albums from the 80’s, showing up often in my album shuffling. I definitely consider it one of those little known treasures of the 80’s that are worth checking out.
Posted by Martin Maenza at 4:30 AM