Eddy Grant - Killer on the Rampage 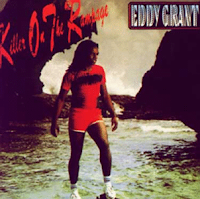 Born in Guyana in 1948, Edmond Montague Grant moved to London with his family at a young age. He was lead guitarist for a group called the Equals in the late 1960’s, racking up his first number 1 song he had written with “Baby, Come Back”. The Clash recorded a version of his song “Police On My Back” for their 1980 album Sandinista!.

Eddy Grant started his solo career in 1975. In November of 1982, he released Killer on the Rampage, his sixth solo disk. It charted at number 9 in New Zealand, number 7 in the UK and number 10 on the US Billboard Hot 200. It featured a number of his most known hits, made popular thanks to music videos that ran often on MTV. Today we will look at this one on its thirtieth anniversary.


Side one takes us down to “Electric Avenue”. As the second single, it went to number 32 in New Zealand, number 9 in Germany, number 8 in the Netherlands, number 3 in Ireland and number 2 in the UK. Here in the US, it hit number 18 on the Billboard R&B charts, number 6 on the Dance charts and number 2 on the Billboard Hot 100. The lyrics refer to the 1981 riot on a Brixton market street in London. That opening riff with the drums, the synth and the guitar squeal get you right into the song.

The first single released was “I Don’t Wanna Dance”. It went to number 1 in the UK (spending three weeks at that spot), Ireland and New Zealand, and number 2 in the Netherlands. In the US, it stalled at number 53 on the Billboard Hot 100. This one is an up-tempo, reluctant break-up song.

“It’s All in You” continues along the same kind of beat as the previous track. It too is about a failing relationship, again pointing the blame squarely on the woman and her actions.

The third single “War Party” went to number 47 in Germany, number 42 in the UK and number 7 in Ireland. The political lyrics have an anti-war stance, particularly against the United States (though not explicitly named).

“Funky Rock ‘n’ Roll” has a solid dance beat and a funky bass riff to get you out of your seat.

Side two begins with “Too Young to Fall”, a bouncy number with sage advice to a youth about what she might perceive as love. Consider it an island-version of “Go Away Little Girl”.

As the title implies, “Latin Love Affair” goes south-of-the-border for its swinging rhythm.

The tempo slows down for “Another Revolutionary”, a tale of a questionable freedom-fighter. It is interesting how Grant harmonizes with himself on this one. Besides writing and producing the album, he also played all the instruments and did all the vocals.

“Drop Baby Drop” keeps the tempo low-key for this relatively tame song about getting down to loving.

The title track closes out the album. “Killer on the Rampage” too got some exposure to the MTV audiences and I recall hearing it a bit on the local college radio stations as well.

This album was the first exposure to Eddy Grant I had about back in the early 80’s. Killer on the Rampage was a fair introduction to the reggae sound as Grant’s deep vocals fit well with that synth/percussion sound. I also think his physical appearance, tall and commanding, helped quite a bit too to garner an audience. The whole package, music and charisma, really sold me on the songs.
Posted by Martin Maenza at 4:30 AM