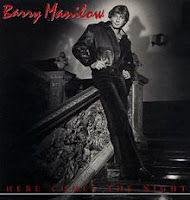 Tomorrow (November 17th) marks the thirtieth anniversary of the release of Here Comes the Night, the ninth studio album for American singer-songwriter Barry Manilow. This 1982 record was released in the UK under the title I Wanna Do It With You.


Side one opens with “I Wanna Do It With You”. Released as a single in the UK, it went to number 8 on the charts. The song has a 1950’s feel to me, musically, with the backing doo-wop vocals; the lyrical sentiment of “doing it” has a much more contemporary connotation though. The Pointer Sisters recorded a version of the song for the B-side of their single “American Music” which came out in 1982 also.

“Here Comes the Night” is a gentle pop ballad about longing for a lover that is no longer around.

“Memory” is a song from the 1981 musical Cats, written by Andrew Lloyd Webber. Manilow recorded a cover of this nostalgic remembrance for the album and released it as the first single; this version went to number 39 on the US Billboard Hot 100 and number 8 on the Adult Contemporary charts. I appreciate that he sticks to the original arrangement, paying the timeless tune its proper respect.

“Let’s Get On With It” has a bit of a funk flavor, thanks to the opening bass line and the piano riff. This one sounds like something you would have heard from Michael McDonald or the Doobie Brothers at the time.

“Some Girls” was a song written by Nicky Chinn and Mike Chapman in 1979 and recorded by the British pop group Racey on their debut album Smash and Grab. Manilow does a cover of this rocking tune here, playing up the piano line for which he excels.

Side two starts with “Some Kind of Friend”. The song has strong guitar and synth riffs, creating an upbeat, danceable track that sounded right at home with the music on the radio of the early 80’s.

“I’m Gonna Sit Right Down and Write Myself a Letter” was written in 1935 by Fred E. Ahlert and Joe Young, and it appeared as part of the Broadway musical Ain’t Misbehavin’. Manilow’s version takes it for a country spin complete with twanging guitar.

For “Getting Over Losing You”, Manilow goes back to his pop roots with a song about trying to move on after a break-up with someone who meant the world to him.

“Heart of Steel” was used as the B-side to the first single. The lyrics show a strong confidence in the face of an abusive ex-girlfriend. The rocking track features a nice saxophone solo.

“Stay” closes the album with a big dramatic ballad where he pleads a former love to return for reconciliation.

On Here Comes the Night, Barry Manilow performs in a variety of genres, from Broadway to R&B and from rock to country. I like the mix as it keeps the songs from getting repetitive and predictable. It also shows Manilow’s passion towards the wide spectrum of music. I often feel that way too as often my iPod is on shuffle with music from a specific decade or year. I can go from heavy rocking guitars to smooth soulful grooves, from country rhythms to synth dance beats, without batting an eye.
Posted by Martin Maenza at 4:30 AM

Email ThisBlogThis!Share to TwitterShare to FacebookShare to Pinterest
Labels: 80's, Barry Manilow, Here Comes the Night, I Wanna Do It With You, music