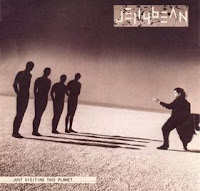 Happy fifty-fifth birthday today (November 7th) to John “Jellybean” Benitez. Born in the South Bronx, this New York City songwriter, drummer, DJ and producer has done remixes over the years for a number of artists including Madonna, Debbie Harry, Michael Jackson, Whitney Houston and the Pointer Sisters. Today, Benitez is the Executive Producer of Studio 54 Radio which can be heard on Sirius XM satellite radio.

In 1987, Jellybean released his second album Just Visiting This Planet. Like his previous release, he composed a number of dance tracks and spotlighted some upcoming singers on them.


Side one opens with “Little Too Good to Me” featuring Elisa Fiorillo. She was just fifteen years old when she competed on Star Search in 1983. Jellybean asked her to do the lead vocals for a couple tracks on this album, exposing her to a worldwide audience. I remember this one quite fondly from my clubbing days during my final year of college; it has a funky guitar hook and a steady beat that beaconed people to the dance floor.

Fiorillo also is spotlighted on “Who Found Who”. The single hit number 16 on the US Billboard Hot 100, number 3 on the US Dance charts, and number 10 in the UK. A huge hit in the many New York state clubs I visited at the time, it remains a favorite of mine from that period. The video features the young singer and the Puerto Rican producer in a fun, New York City setting.

Adele Bertei is the singer for the next track “Just A Mirage”. Bertei was a keyboard player with James Chance and the Contortions, a New York punk jazz group, in the early 80’s. The drums and synths on this one are like a storm, powerful and unrelenting. If you were hitting the club scene in the late 80’s, it is very likely heard this song even if you did not know who recorded it.

Bertei is back again with “Am I Dreaming”. For me, this one did not have the high energy as the opening trio. While a tad more laid back, it still has a decent rhythm for dancing.

Side two begins with Steven Dante and “The Real Thing”. Dante is the stage name for British soul singer and songwriter Steven Barrington Dennis. As a single, this song peaked at number 13 on the UK charts and number 1 on the US Dance charts. Dante has a strong vocal style that gives this song a real warmth and depth. I have not heard this one in almost twenty five years, yet it immediately took me back to the clubs in 1987 where this one played nightly.

Another Dante track “Walking in My Sleep” and a Bertei track “Hypnotized (By Your Touch)” follow. I did not find either of them as strong as the earlier ones by these two singers.

The album closes with “Jingo”, a Latin-themed dance track that was also popular in the clubs in late 1987. The guitar work on this one smokes.

Just Visiting This Planet features some signature dance music from the later half of the 1980’s. Jellybean knew is way around the studio and could produce some amazing rhythms for deejays to play around with on sets. This is another classic from my past that is sadly not readily available in the world of digital downloads. I found a couple copies for sale on eBay in vinyl and audio compact discs for sale from Amazon partners for from $20 to almost $325! Yikes. In the meantime, I was just happy for the folks who posted audios over on YouTube; it really helps a lot.
Posted by Martin Maenza at 4:30 AM