Mental As Anything - If You Leave Me, Can I Come Too? 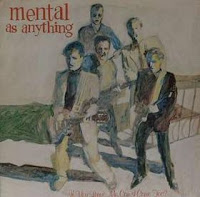 This month we are celebrating the thirtieth anniversary of the US release of If You Leave Me, Can I Come Too? from the Australian new-wave band Mental As Anything. However, the original third studio album Cats & Dogs (from which most of the tracks come) was released down under in September of 1981 where it hit number 3 in Australia and number 2 in New Zealand. Under the same title as the US release, the album hit number 44 in Canada.


The roster of Mental As Anything at the time consisted of the following: Wayne Delisle (drums), Reg Mombassa (guitar, vocals), Peter O'Doherty (bass, vocals), Martin Plaza (guitar, vocals), and Greedy Smith (vocals, keyboards, harmonica). All of the guys contributed to the song writing on the record. American audiences knew the group when they toured as the opening act for Men At Work.

Side one of the US release opens with the title single. "If You Leave Me, Can I Come Too?" hit number 16 in New Zealand and number 4 in Australia. The up-beat, bouncy rhythm contrasts the building conflict between the couple in the song. I like the guitar hook that bridges the verses and the chorus.

They released “Let’s Cook” as a promotional single with an accompanying video. I like how this one bops along on the keyboards. It gives the track a 60’s sensibility. The band re-recorded the song with the Wiggles, from the popular Australian children’s show, for the later‘s album Let‘s Eat in 2010.

"Too Many Times", the second single, went to number 34 in Canada, number 23 in New Zealand and number 6 in Australia. The lyrics tell about a guy coping horribly after a break-up, again set against an up-beat musical backdrop.

"Got Hit" kicks the tempo up a notch and rocks things out a bit more than the earlier tracks. It has the first heavier guitar solo of the record.

"Looking For Bird", an ode to cruising in an automobile, has a 60’s rockabilly sound.

The group shifts back into a more pop mode with "Ready For You Now". The guitars give a slight off-chord sound on the chorus that makes it somewhat different.

Side two opens with a newly recorded track produced by Elvis Costello. "I Didn't Mean To Be Mean" has a snappy, freight-train rhythm to it, and the vocals remind me of another Elvis, the King of rock ‘n’ roll himself. Even the lyrics include the phrase “don’t be cruel”.

The next two tracks came from the group's 1979 debut album Get Wet. "The Nips Are Getting Bigger" is the rocking tale of a night of drinking. As a single, it went to number 16 in Australia on the year of release.

"Egypt", with its exotic sound, is a song about finding solace in a foreign land. It too was a promotional single, released in Australia in 1980.

The album closes with "Berserk Warriors". As the third single, it stalled at number 50 in New Zealand and number 30 in Australia. The acoustic guitar on this one is a nice change of pace, and the ending with the march beat and the chanting really fits the song.

If You Leave Me, Can I Come Too? was not an album I was very familiar with back in 1982, though I have come to know Mental As Anything through this album’s title track. They are definitely a group I would like to look into more as I enjoy their sound. I really like the pleasing vocal harmonies. The music on this album has a power-pop sound that goes along with those perfectly.
Posted by Martin Maenza at 4:30 AM

Email ThisBlogThis!Share to TwitterShare to FacebookShare to Pinterest
Labels: 80's, Greedy Smith, If You Leave Me Can I Come Too?, Martin Plaza, Mental As Anything, music, Peter O'Doherty, Reg Mombassa, Wayne Delisle