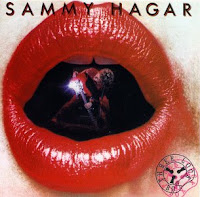 Tomorrow (November 30th) marks the thirtieth anniversary of the release of Three Lock Box, the seventh solo studio album from American singer-songwriter and guitarist Sammy Hagar. It went Gold in the US, reaching number 17 on the US Billboard Hot 200, and features one of his biggest charting singles.

Joining Hagar on the record was Bill Church (bass), Gary Pihl (guitar) and David Lauser (drums). He also got some assist from Alan Pasqua (keyboards) and Richard Page of Mr. Mister (on backing vocals).


Side one opens with the title track. Hagar has said that "Three Lock Box" refers to sunken treasure with multiple locks on it, meaning it is most valuable as it requires more keys to open. He also refers to the three being physical, mental and spiritual potential; balancing the three is the way to achieve human greatness. I like the underlying guitar riffs on this one - very down and dirty.

"Remote Love", with its rambling rhythm, looks at a long distance relationship.

Hagar co-wrote "Remember the Heroes" with Journey's Jonathan Cain, who also played keyboards and provided vocals on the track. Also guesting on vocals was Mike Reno of Loverboy. The song pays tribute to war veterans.

"Your Love Is Driving Me Crazy" was the first single from the album. It went to number 13 on the US Billboard Hot 100 and number 3 on the Mainstream Rock charts. I have always liked how the verses ramp up to the chorus which, when it comes on the radio, I will sing along to.

Pasqua‘s keyboards are prominent on the opening of chilling, spooky "In the Room".

Side two begins with "Rise of the Animal". I like how the first line is “I just came out of the room”, a nod to the closer of side one. This one too has an intense feel to it.

Things lighten up a bit with the next track "I Wouldn't Change a Thing". It speaks to a long-standing relationship that has seen its share of ups and downs, good times and bad. It is that whole collection of experiences that shapes the bond between the couple.

"Growing Up" reflects positively upon the transition from carefree youth to responsible adult.

The second single was "Never Give Up"; it peaked at number 46 on the US Billboard Hot 100.

The album closes out on a harder rocking note. "I Don't Need Love", co-written by the four band members, was the B-side to the first single. This statement of emotional independence features a rapid-fire rhythm.

For some reason, listening to Three Lock Box, I wanted to lump Sammy Hagar into the same category as Rick Springfield. Now, I don’t mean that to be insulting as I like the latter’s music quite a bit. What I mean is Hagar goes to very similar lyrical and musical wells on some of the tracks here. But Hagar can be a bit of a chameleon too, rocking out or getting extremely moody too.
Posted by Martin Maenza at 4:30 AM