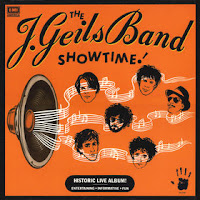 Today (November 12th) marks the thirtieth anniversary of Showtime, the thirteenth studio album from the J. Geils Band. Recorded in Detroit, Michigan, it was also the group’s third live album. Lead singer Peter Wolf left the band after this release to pursue a solo career.

Showtime was a Gold seller in the US and peaked at number 23 on the US Billboard Hot 200.


Side one opens with “Jus’ Can’t Stop Me” from 1978’s Sanctuary. Seth Justman’s keyboards shine here, and Magic Dick plays the heck out of the harmonica. This concert opener gets the crowd worked into a frenzy right out of the gate.

“Just Can’t Wait” is the first track from the 1980 Love Stinks. J. Geils opens this one up with that oh so familiar guitar riff.

Also from 1980 comes “Till the Walls Come Tumblin’ Down”, a blues song Wolf dedicates to the beer drinkers in the audience. The crowd really gets into the “ooh yeah” part of the chorus.

The next track is heralded in with a police siren. “Sanctuary” was the title track of the 1978 album.

Things slow down with the ballad “I’m Falling”, an introspective tune. The horns by Magic Dick, Crispin Cioe, Arno Hecht and Hollywood Paul Litteral really make this one for me.

On “Love Rap”, Wolf weaves a narrative tale about the origins of love and reefer back in the Garden of Eden. This one does not do much for me; I guess you had to be there. The worst part is that it logically leads right into the next track which, back in the day, you had to flip the record for. On a continuous format like compact discs or via MP3s, it is a lot more of a seamless payoff.

Side two starts with 1980‘s “Love Stinks”, the anti-relationship anthem. Stephen Bladd gets a bit of a drum solo at the end of this one.

The lively, blues-rock “Stoop Down #39” comes from 1974’s Nightmares…and Other Tales from the Vinyl Jungle. The nearly six-minute track gives the band plenty of space to jam.

First appearing on 1977‘s Monkey Island, this new version of “I Do” reached number 24 on the US Billboard Hot 100 in early 1983. The original version though was recorded by the American soul group the Marvelows in the summer of 1965.

From 1981‘s Freeze Frame comes “Centerfold”. Admittedly, I am partial to the original version as opposed to this live one which seems to be a bit off-tempo for me for some reason.

A new cover of “Land of a Thousand Dances”, a 1965 hit for Cannibal and the Headhunters, closes out the show. Now you know you are old, like me, when you are familiar with the many dance steps that are mentioned in this one.

My older brother, a fan of the J. Geils Band, had a copy of Showtime on vinyl. As such, I got to hear it quite a bit when he returned home from college in the spring of 1983. Admittedly, I too became a fan of the record through osmosis. The band put on a great show and the audience was totally into it; that all comes across quite clearly on the recording.
Posted by Martin Maenza at 4:30 AM

nice!! I remember buying the record when it was released in the Netherlands because of the hitrecord Centerfold. Like you i don't care that much for the Love Rap, but the rest of the LP kept me locked up in my room. I soon found out that this wasn't the first record of the band and i tried to save money to buy the rest. I'm still hoping for the band to visit the Netherlands to be able to see them perform for the first time in my life...