Siouxsie and the Banshees - A Kiss in the Dreamhouse 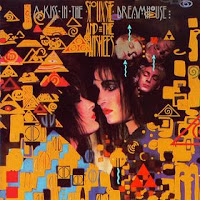 Today (November 5th) marks the thirtieth anniversary of A Kiss in the Dreamhouse, the fifth studio album from England's Siouxsie and the Banshees. The record went to number 47 in Sweden, number 19 in New Zealand and number 11 in the UK.

At the time, the group was a quartet. Siouxsie Sioux sang while Steven Severin played bass and Budgie played drums and harmonica. Although guitarist/keyboardist John McGeoch performed on the album, he left the band shortly after this release.


A trio of classical musicians assisted the band on two of the tracks. Caroline Lavelle played cello while Anne Stephenson and Virginia Hewes played violin and tracks three and nine.

Side one begins with "Cascade", a dark and symbolism-filled song about being love.

"Green Fingers" is a song about a wedding with an occult gardener. It opens with a recorder whistle and features tense guitar chords. Sioux’s vocals have their usual haunting qualities.

"Obsession" has an interesting sound with the slow, muffled beat and the chiming bells. Along with the lyrics, the whole song has a dangerous stalker vibe.

"She's a Carnival" has a more up-tempo, danceable beat. Lyrically, it compares an experience in lovemaking to the high energy thrills of a carnival come to town. The calliope organ section at the very end is a nice touch. This is my favorite track on side one.

"Circle" looks at cycles in life, where teens make bad choices only to have their children repeat the same mistakes. In the end, the choice to break the circle is up to the individual. The music mirrors the repetitiveness quite well.

Side two opens with "Melt!", the second single which peaked at number 49 in the UK. The lyrics mix sex and death into a single experience.

"Painted Bird" confuses me a bit; I am not completely sure what it is all about. I like the Hitchcock reference though, to his classic horror film The Birds.

"Cocoon" has a jazz vibe musically that I like a lot. The lyrics tell of someone withdrawing to the security of their bed, unable to face the world around them.

"Slowdive", the first single from the album, closes things out; it charted in the UK at number 41. This one has a slinky, sultry rhythm to it. This one is my favorite track on the second side.

Back in the early 80’s when A Kiss in the Dreamhouse was released, I definitely would not have been into Siouxsie and the Banshees. Their sound was a bit too dark for me. As an adult, I can see the nuances and layers of these songs. However they certainly would not be something I would listen to that often; their music really requires me to be in a very specific mood to get into it.
Posted by Martin Maenza at 4:30 AM