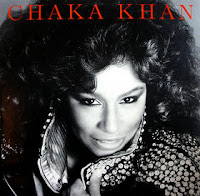 Today (November 17th) marks the thirtieth anniversary of Chaka Khan, the fourth solo studio album from the American R&B/soul singer. It charted at number 52 on the US Billboard Hot 200 and number 5 on the Billboard R&B charts.


Side one opens with the six-and-a-half minute long “Tearin’ It Up”. A shorter version was released as a single and peaked at number 48 on the US R&B charts and number 26 on the Dance charts. Khan layers in the vocals, from soaring high notes to deep, supportive lower notes; it shows why she was one of the queens of R&B in the late 70’s and early 80’s.

The funky duet “Slow Dancin’”, with its methodic grinding rhythm, features Rick James on vocals. While I always appreciate hearing the Buffalo native mixing it up with various singers, I definitely prefer the harmonies he would lay down with Teena Marie. This one does bring to mind Khan’s days with Rufus in the 70’s though.

“Best In the West” fuses western and funk into an intriguing musical composition. I do like the beats here (good for dancing to); however the lyrics are a little bit mundane and uninspired.

The side closes with a cover of Michael Jackson’s 1971 hit “Got to Be There”. Khan’s version, which slows down the tempo a notch, climbed to number 67 on the US Billboard Hot 100 and number 5 on the R&B charts. Again, her varied range really makes the song and helps this cover stand out from the original.

Side two begins with the “Be Bop Medley”. This one features a mix of tunes from the Jazz greats of Thelonious Monk, Charlie Parker, Dizzy Gillespie and John Coltrane. Producer Arif Mardin and Khan won the Grammy for Best Vocal Arrangement For Two Or More Voices with this track. I really like how she handles the various scats and runs on this one.

“Twisted” features a different kind of heavy, tempered percussion to it that gives it a sensually urgent sound. Khan takes her time with this, weaving the words into a seductive siren’s song. Ray Gomez has a wicked guitar solo on this one.

“So Not To Worry” is a mid-tempo groove with a solid bass line by Anthony Jackson. The lyrics tell the tale of two people, away from their significant others, meeting for a clandestine love affair.

“Pass It On (A Sure Thing)” closes out the record with another funky dance jam. I was not hitting a lot of dance clubs at the time this album was released, still being in my final year of high school in a small town, but I bet this one was a popular filler track by deejays. The bass and the horns really make the song.

One thing I have been enjoying this year is discovering albums that I had not previously heard. Chaka Khan falls into that category. I am very glad to have an opportunity to check out this long out-of-print record (thanks again to folks on YouTube posting tracks). Chaka Khan is definitely one of the great voices in R&B and soul, and this record certainly helps prove that point quite well.
Posted by Martin Maenza at 4:30 AM