Queen - News of the World 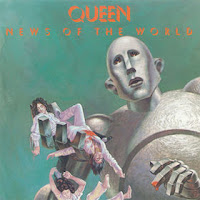 On October 28th of 1977, the English rock band Queen released News of the World, their sixth studio album. As had previous albums, this one too was a multi-Platinum seller in the US and Canada. Chart-wise, it went to number 15 in New Zealand, number 9 in Sweden and Austria, number 8 in Australia, number 7 in Germany, number 4 in Norway and the UK, number 3 in Japan and on the US Billboard Hot 200, number 2 in Canada, and number 1 in France and the Netherlands.


The album cover, painted by American science-fiction artist Frank Kelly Freas, was based upon a 1953 issue of Astounding Science Fiction. The original featured a giant robot holding the dead body of its creator. The band asked Freas to replace the one man with images of their own dead bodies. I can remember this one very well from my youth as one of my neighborhood friends and my older brother had copies on vinyl. The gatefold cover art was very iconic.

Side one opens with a one-two punch of tracks that most often are played together on album-oriented rock stations. As a double-A side single, they went to number 13 in Germany, number 12 in Austria, number 8 in Australia and New Zealand, number 4 on the US Billboard Hot 100, number 3 in Ireland, number 2 in the UK and the Netherlands and number 1 in France. I owned this one on a 45 single.

"We Will Rock You" was written by Brian May to be an anthem. I like the simplicity of this one - steady rhythm with the vocals; and then we get that smoking guitar solo at the end. The heavy four-four timed meter is perfect for crowds to stomp out on metal stadium bleachers. Rolling Stone magazine ranked it at number 330 on its list of the 500 Greatest Songs of All Time, and the Recording Industry Association of America ranked it at number 146 on its list of Songs of the Century.

"We Are the Champions" was written by Freddie Mercury back in 1975 but was not recorded until this album. As it was inspired by an English football tournament, it is not surprising that it became a sports arena favorite over the last few decades. I like how it builds in power from a softer opening.

"Sheer Heart Attack" was started back in 1974 for the group's album by the same name but was left unfinished until this album. The song has a frantic, high-speed rhythm to it that is really cool - definitely a response to the rising punk rock scene of the 70’s.

May has confirmed that "All Dead, All Dead" was written about the passing of his cat. The playful piano on the verses brings to mind a quaint parlor with white doilies on the end tables.

"Spread Your Wings", the second single, reached number 34 in the UK, number 29 in Germany and number 26 in the Netherlands. The lyrics proclaim the need to escape the trappings of life and begin anew, told of course in Queen’s usual dramatic, theatric style.

"Fight From the Inside" was written by Roger Taylor, featuring mostly drums and bass. Taylor recorded nearly all of the ultra-funky song alone; he got a little guitar help from May.

Side two begins with the down and dirty of "Get Down, Make Love". The music is raw and Mercury’s vocals are dripping with lust. It does get a little cosmic and trippy near the end.

"Sleeping on the Sidewalk" tells the tale of an American trumpet player who rises from poverty to musical success. Its blues style jam would make ZZ Top proud.

John Deacon and May both perform on Spanish guitars for "Who Needs You", a beautiful and oh-so-proper kiss-off to a deceptive lover.

"It's Late", a third single, stalled at number 74 on the US Billboard Hot 100. It is also the longest track on the album, clocking in at close to six and a half minutes. That gives the guys plenty of room to rock out. The tempo change-up near the end was quite unexpected but it fits.

The album closes on a gentler note with "My Melancholy Blues", spotlighting Mercury’s lovely voice at the piano. It is like a 1930’s torch song.

I definitely like the musical variety on News of the World. Queen shows they have the interest and skills to pull off more than just straight rock.
Posted by Martin Maenza at 4:30 AM