After the Fire - Der Kommissar 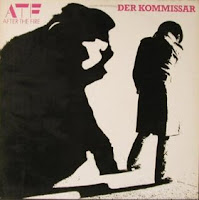 After the Fire was a British rock band that moved from playing progressive rock at the start of their career in the early 70’s to a more new-wave sound by the early 80’s. The group’s line up shifted a bit over that time but it was always anchored by keyboardist and singer Peter Banks.

Today we mark the thirtieth anniversary of Der Kommissar, a compilation of tracks from three earlier albums along with the new title track. In the US, this was the only release by the group and it went under the title of ATF. During the period covered here, the group consisted of Banks, Andy Piercy on bass, John Russell on guitar and Pete King on drums.


Side one opens with “Laser Love” was the title track to the group’s second album from 1979. As a single from that year, it topped out at number 62 in the UK. From the opening to the movement of the first verse, you can see the transition of sound that I mentioned earlier. It definitely was on the forefront of that synth-based sci-fi/video-game era sound.

Also from Laser Love comes “One Rule For You”; as a single it hit number 40 on the UK charts in 1979. This reminds me of early tracks by the Cars. Once again, Banks’ synthesizers are very prominent.

At the tail end of 1981, After the Fire released their fourth album Batteries Not Included. “Dancing In the Shadows” is the first of the tracks here from that one; the remaining songs on this side also came from there. A re-recorded version was released as the second single in the US; it stalled at number 85 on the US Billboard Hot 100. I like the funky bass groove laid down here by Piercy.

“Sometimes” has a rapid-fire tempo and a strong rocking sound thanks to the guitars. I get a strong Queen vibe from it.

The slower, dream-like “Sailing Ship” has a strong synth opening and a wailing guitar solo by Russell.

“Carry Me Home” shifts back into the electronic sound of the early new-wave. The lyrics tell of flying back home after being away for a long time, away from the one you love.

Side two begins with “Frozen Rivers”, the last track taken from Batteries Not Included. The lyrics speak of those stuck in the same old rut, not bothering to make an effort to improve their situation; it likens them to frozen rivers that never reach the sea.

“Love Will Always Make You Cry” comes from the band’s third album 80-F from 1980. This one has a standard pop sound to it - a bouncy beat with light guitars and restrained keyboards.

“Starflight” is also from that 1980 record. It starts out with a slow introduction but moves into a more urgent tempo before the first minute passes. I like it a lot more after that transition. Again, the group dips into that sci-fi theme that was very popular at the time thanks to so many movies.

“Der Kommissar” was first released by Austrian singer Falco in 1981. After the Fire covered it with lyrics in English and released it as a single in early 1983. The song went to number 47 in the UK, number 12 in Canada, number 5 on the US Billboard Hot 100 and number 2 in South Africa. I have to thank Top 40 radio and MTV for making me very aware of this song and the group. It was a great song to dance to as well.

“1980-F”, the first track from 80-F, closes out the collection. I really like the dance beat on this instrumental track; it has a high-energy hook that grabs you right out of the gate.

Living in the US, the only real exposure I had to After the Fire was via the title track. Listening to the collection here on Der Kommissar, I get a feel that the group enjoyed experimenting with a variety of different music styles.

i have fond memories of this band.They were a "christian rock" band.First hit was "laser love" and one of the favourites was "one rule for you, one rule for me" They were in a "where are they now" spot in a rock mag a few years ago-most of them have turned to Budism -think only one of them is still a practicing christian

Many thanks Martin, good to know we are still remembered! An excellent and fair summary of our body of work...

Not sure where you first commenter gleans his info about band members post the 80s though ;-)

Peter, thank you so much for reading and the comments. Any corrections are always welcome.

peter, the article was in Q magazine a few years a go .I still think "One Rule For You" is a well written song.

Thanks Martin, article seems pretty flawless, possibly only ambiguity is that Andy Piercy was lead singer, I, with John, provided the backing vox.

Thanks for response, too, Mr Crabbit Man, good to make contact with you since 'Q', from memory that was around 1995?

My concern about your comment was that we always hated the term 'christian band' as that tended to link us with all the naff stuff put out by so called christian record labels, whereas we were simply committed to chasing acceptance in the mainstream music business.

Whilst that sounds defensive I would also say that of the surviving members of the line up Martin mentioned, sadly Pete K died 25 years ago, all are still passionate believers...

However, I do recall that former drummer Ivor did dabble with Buddhism for a while as well as becoming very high up in the police. He was featured on Simon Mayo's 'confessions' tv prog once.

As I said, touched to be remembered, many thanks!