JD Souther - You're Only Lonely 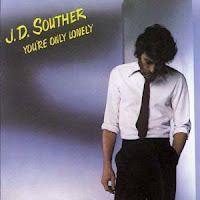 Welcome to another edition of Seventies Saturday. This weekend we wish a very happy sixty-seventh birthday to American musician, singer/songwriter and actor JD (John David) Souther.

Born in Detroit, Michigan, and raised in Amarillo, Texas, he moved to Los Angeles, California, in the late 1960’s where he became roommates with Glenn Frey (of the Eagles) and lived upstairs from Jackson Browne. After his first solo record in 1972, he joined with Chris Hillman and Richie Furay to form the aptly-named group Souther Hillman Furay Band. He wrote many hits for the Eagles and Linda Ronstadt.


In 1979, he released his third solo album You’re Only Lonely. His first and only record on the Columbia label, it charted at number 41 on the US Billboard Album chart and number 68 in Canada. It also generated his only recorded Top 40 hit to date.

Side one opens with that hit single title track. In Canada, “You’re Only Lonely” went to number 18 on the pop charts, number 12 on the country charts and number 2 on the Adult Contemporary charts; here in the US, it went to number 60 on the Billboard Country charts, number 7 on the Billboard Hot 100 charts, and number 1 on the Adult Contemporary charts. The song sounds very much like on by Roy Orbison, an artist who was a big inspiration to Souther. Danny Kortchmar assists on guitar here. David Sanborn plays the saxophone. To help out with the vocal harmonies, he recruited Phil Everly (of the Everly Brothers), Don Henley and old friends Frey and Browne. The combination gives this one that unforgettable sound. This one takes me back to listening to my radio at night in my bedroom as a young teenager.

“If You Don’t Want My Love” has a little bit of a tropical sound with Jai Winding on the organ and Dan Dugmore on the steel guitar. The up-beat track reminds me a bit of a Jimmy Buffet tune, fun and festive even when the lyrics are about a potential break-up.

Things slow down a bit with “The Last in Love”, a song co-written with Frey. This pop-country ballad, which was the B-side to the second single, allows Souther’s voice to soar. Don Grolnick plays piano on this one.

The other single from the album was “White Rhythm and Blues”, released in 1980. It stalled at number 105 on the US Billboard charts. Like the previous track, it has a gentle sway to it. Phil Everly assists with the vocals on this one as well.

Side two begins with “’Til the Bars Burn Down”, an up-tempo party song with a bit of a blues twinge to it. Co-writer Frey assists with the guitars here.

“The Moon Just Turned Blue” moves us right back to the country genre, one for which Souther really excels at writing.

“Songs of Love” was the B-side to the first single. The song is very melancholy, done is a soft, slower style that keeps your attention focused.

“Fifteen Bucks” is a joint collaboration with Grolnick, Kortchmar, bassist Kenny Edwards, drummer Rick Marotta and guitarist Waddy Wachtel. The song is really an extended jam with six guys just having some fun. It is like something that might have come out of a garage band just handing out on a week-night, fooling around with a groove. Fun but ultimately fluff.

“Trouble in Paradise” closes the album on an up-tempo note, with a song that pays homage to the roots of rock ‘n’ roll. It comes complete with Sanborn and Tom Scott on saxophone and John Sebastian on saxophone.

This was the first time I believe I have heard all of You’re Only Lonely. While I knew the title track from the Top 40 airplay that was a big part of my life in 1979 and 1980, if I had heard any of the other tracks it would have been over those next few years from the local album-oriented rock station. Clearly, JD Souther had many friends in the music business by the time he was making this album as evidenced by the who’s who roster in the liner notes. Those assembled certainly help to add to the variety of music in the nine tracks. Some of them work quite well; a few not so much. There were a couple tracks from it that I will definitely be adding to my collection as a result.
Posted by Martin Maenza at 4:30 AM