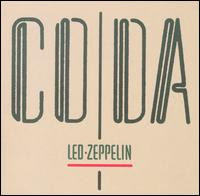 Today (November 19th) marks the thirtieth anniversary of the release of Coda, the final studio album from the legendary English rock band Led Zeppelin. Released two years after the disbanding that followed the death of drummer John Bonham, this 1982 record is a collection of outtakes from various recording sessions across the group’s twelve-year history. Jimmy Page explained the reasoning for this: since there was so much bootleg material already circulating, they felt they should put out the rest of the studio offerings for the fans.

The Platinum seller hit number 6 on the US Billboard Hot 200. Around the world, it peaked at number 43 in Denmark, number 18 in Norway and France, number 16 in Japan, number 9 in Australia, number 7 in New Zealand, number 4 in the UK and number 3 in Canada.


Side one begins with a live version of “We’re Gonna Groove”, recorded in January of 1980 at the Royal Albert Hall with guitar parts overdubbed. The song was originally written by the great Ben E. King.

“Poor Tom” was recorded in 1970 as well as part of the sessions that turned into Led Zeppelin III. The song, filled with various literary references, went to number 18 on the US Mainstream Rock charts. I like Page’s acoustic guitar work here. Robert Plant provides the harmonica, giving it a backwoods blues feel.

A live version of “I Can’t Quit You Baby” also came from the January 1980 Royal Albert Hall show. The song is a 1956 blues standard written by Willie Dixon. It really showcases that early Zeppelin sound that was so heavily influenced by the early masters of the genre. Bonham and bassist John Paul Jones set the tempo while Page goes to town on the electric guitar.

“Walter’s Walk” was recorded in 1972 as part of the sessions for Houses of the Holy. What is notable about this track and, for the most part, this entire album is that even these outtakes are all very decent rock and roll tunes. It definitely did not feel like a cheat or cashing in; these are all worthy Zeppelin tracks.

Side two opens with “Ozone Baby”, a track originally slated for the 1978 In Through the Out Door. It proved popular on the US Mainstream Rock charts, peaking at number 14. I can remember this one from the album-oriented rock station I listened to during my high school years. They liked to mix it in on rock-block weekends with classic Zeppelin.

“Darlene” also came from that same 1978 session; it too charted on the US Mainstream Rock charts at number 4. Plant’s vocal styling adds a rather lecherous slant to this ode to a lovely young lady. Then again, Zeppelin was always good at the dirty-gritty rock sound. I like Jones’ piano playing here.

“Bonzo’s Montreux” started out as a drum solo by Bonham recorded in 1976. Page added some electronic enhancements to it afterwards.

“Wearing and Tearing”, also from the 1978 sessions, is a hard rocking track that fitting closes out the album. As the longest track on the record, it showed that Zeppelin was aware of the changing music scene at the time, with the rise of punk, and that they could raise as much hell as the new, younger generation of bands.
Posted by Martin Maenza at 4:30 AM