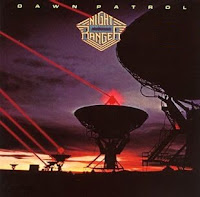 This month marks the thirtieth anniversary of Dawn Patrol, the debut album from the San Francisco rock band Night Ranger.

The album charted at 115 on the US Billboard Hot 200 charts.


Side one opens with “Don’t Tell Me You Love Me”. As the first single, it peaked at number 40 on the US Billboard Hot 100 and number 4 on the US Mainstream Rock charts. Decades later, it would rank at number 92 on a VH1 list of the Best Hard Rocking Songs of All-Time. This one was very popular during my senior year, thanks to high energy guitars and a driving drumbeat; it was definitely a school dance favorite.

“Sing Me Away”, the second single, reached number 54 on the US Billboard Hot 100 and number 39 on the Mainstream Rock chart. I like the vocal harmonies on the chorus of this one and the sweeping guitar riffs.

“At Night She Sleeps” kicks the tempo back up for this tale of a lonely young woman who misses her former boyfriend despite being involved with another guy.

“Call My Name” was released as a third single, but it failed to chart. The first verse is delivered by a hushed piano accompaniment before exploding on the first chorus. After a round of sirens, it ends the same way as it began with just the piano and vocals.

“Eddie’s Comin’ Out Tonight” is the up-tempo tale of a guy dressed to the nines and out on the prowl.

Side two begins with “Can’t Find Me a Thrill”. I can recall this track getting some play on the local album oriented-rock station back in 1982, especially on Two-For-Tuesdays or Rock Block Weekends.

“Young Girl In Love” was the B-side to the third single. In my opinion, I think this one might have actually been a better single; I think it would have appealed to the younger audiences. It has a memorable musical hook.

The B-side to the second single was the down and dirty “Play Rough”. I like the screaming guitar solos on this one.

“Penny”, an upbeat ode to a party girl, follows.

The band‘s name comes from the final track “Night Ranger”, a reflection on the teenaged dating scene. This song served as the B-side to the first single. The tempo change-up halfway through is definitely unexpected and interesting.

Originally the band had recorded under just the name Ranger and had even printed the first albums to be shipped before they learned of a country band already called Ranger. They renamed themselves Night Ranger, after the last track, and destroyed those first copies of the record.

I did not own a copy of Dawn Patrol back in my high school days. I liked Night Ranger well enough at the time but focused my spending on more of the new-wave records. I picked up a copy of this one on CD though around my birthday in 2012, thanks to a $50 Best Buy gift card and a huge section of discount albums in the $5 range. Since then, I’ve listened to it through over a half dozen times. I think it holds up pretty well for being three decades old; here Night Ranger is playing some solid, high energy rock and roll.
Posted by Martin Maenza at 4:30 AM