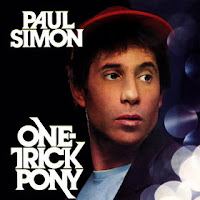 On August 29th of 1980, Warner Brothers released One-Trick Pony, a film written by and starring singer-songwriter Paul Simon as a once-popular folk singer who has not had a hit in a decade. His co-stars were Blair Brown, Joan Hackett and Rip Torn.

The soundtrack for One-Trick Pony was the fifth solo album for Simon. The record went Gold in the US, peaking at number 12 on the US Billboard Album chart; it spent twenty-six weeks total on that chart. It also reached number 35 in Japan, number 23 in Canada, number 17 in the UK, number 15 in Australia, number 11 in France, number 9 in Sweden, number 8 in the Netherlands, number 6 in New Zealand and number 2 in Norway.


Side one begins with "Late in the Evening", a track that earned Simon a Grammy nomination in the category of Best Pop Vocal Performance Male. As the first single, it charted at number 58 in the UK, number 11 in the Netherlands, number 7 on the US Adult Contemporary charts, number 6 on the US Billboard Hot 100, and number 5 in Canada. It is about the discovery of one’s love for music, and it came out during a critical period for me in that area. I’ve always liked the guitar and percussion rhythms that carry through out this one - very upbeat and carefree. I think that’s why I picked this one up as a 45 back in the fall of 1980.

"That's Why God Made the Movies" has a cool, laidback jazzy swing to it.

A live version of the title track, recorded at the Agora Theatre and Ballroom in Cleveland, OH, in September of 1979, is next. "One-Trick Pony" was released as the second single; it stalled at number 40 on the US Billboard Hot 100. The lyrics of this one sum up the film plot quickly: a singer who only knows how to play one type of song. I owned this one too on a 45.

The gentle, introspective "How the Heart Approaches What It Yearns" served as the B-side to the first single. The guitar solo is quite lovely here.

"Oh, Marion", the third single, failed to make any chart impacts. This one tells the tale of a guy who just isn’t equipped for what the world throws at him. I like when Simon does a little scat-riffing with the horns near the end.

Side two opens with a live version of "Ace in the Hole", also recorded at the Agora. The song features a funky bass line as well as a drumbeat march that reminds one a bit of “50 Ways to Leave Your Lover” in spots. It dances into a bit of a gospel groove too as the singer looks for his own redemption wherever he can find it.

After the workout that was the previous track, "Nobody" takes it down a slow, mellow pace.

"Jonah", a song named for Simon’s character in the film, keeps that slower pace while looking at how arrived at this place in his life. I like the play on words, comparing the Biblical Jonah being swallowed by a whale to the movie’s Jonah being taken down by the one hit song.

The B-side to the third single was bluesy "God Bless the Absentee".

The album closes with "Long, Long Day", a duet with R&B/jazz singer Patti Austin that was used as the B-side to the second single.

I am pretty certain I have never seen One-Trick Pony, though after listening to this soundtrack I am very much inclined to. I knew the big radio hits but they are just icing on a sweet musical treat that is the whole album. Paul Simon has always been a master songewriter and really works in a number of genres into this offering.
Posted by Martin Maenza at 4:30 AM