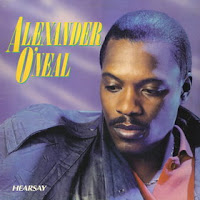 After his self-titled debut album in 1985 (click here for that review), O’Neal put out his second studio album in 1987. Hearsay, which was produced by Jimmy Jam and Terry Lewis, has gone on to be his highest charting album to date. It went multi-Platinum in the UK where it peaked at number 4. It also hit number 26 in the Netherlands, number 22 in Austria and Germany, number 18 in Norway, and number 13 in Sweden. Here in the US, it climbed to number 29 on the Billboard Hot 200 and number 2 on the Billboard R&B charts. Rolling Stone magazine even recognized it as one of the influential albums of 1987 in their year-end review.


The album structure is an interesting one. Interspersed between each of the tracks is a short intro piece running from thirteen seconds to a minute. Most are taken as snippets of side conversations from guests at a party being thrown by O‘Neal.

The first song on side one is “What Can I Say (To Make You Love Me)”. As the fifth single, it went to number 68 on the US R&B charts and number 27 in the UK. This one has a solid synth line and beat that helped drive it to number 32 on the US Dance charts. O’Neal wrestles with that eternal question of how to win a woman’s heart.

“Hearsay” laments about gossip spreading around town, set to a smooth groove.

The fourth single “The Lovers” peaked at number 41 on the US R&B charts and number 28 in the UK. The track is a classic R&B celebration of the emotions between a couple in love.

“Fake”, the first single, gave O’Neal his first number 1 record on the US R&B charts. It also charted at number 82 in Canada, number 33 in the UK, number 25 on the US Billboard Hot 100, number 22 in Switzerland, number 20 in the Netherlands, number 17 in Germany, number 16 in New Zealand, number 14 in Belgium and number 7 on the US Dance charts. I can remember how everyone flooded the dance floors during the opening chords of this jam that calls out those that are phony. The bass hook, for me, is irresistible. It is definitely my favorite track on the whole album.

The second single “Criticize” charted at number 70 on the US Billboard Hot 100, number 40 in New Zealand, number 24 in Germany, number 21 in Belgium and on the US Dance charts, number 17 in the Netherlands, number 14 in Ireland, and number 4 in the UK and on the US R&B charts. This track goes along with two of the earlier ones, forming a theme of sorts about what people will say about others behind their backs.

The first song on side two is “Never Knew Love Like This”, a duet with R&B singer Cherrelle. This single went to number 28 in Belgium and on the US Billboard Hot 100, number 26 in the UK, number 24 in the Netherlands and number 2 on the US R&B charts. These two really sound great together, having done a track together for her album the year prior. I really like the saxophone solo here as well.

“Sunshine” charted two years later, in 1989, on the UK charts at number 72. This was after O’Neal released a remix album called All Mixed Up. Here, O’Neal slows things down for a smooth ballad that compares the woman he loves to life-giving, mood-changing sunshine.

“Crying Overtime” keeps the tempo slow with a sensitive ballad about surviving a brutal break-up.

The final track, “When the Party’s Over”, keeps things on that quiet storm front of a slower groove. Here, O’Neal makes his movie before the last song ends.

Hearsay came out during my final months of college. At the time, Alexander O’Neal was ruling the dance floors of the clubs I went to each weekend; this R&B album was very much a soundtrack to my social life at the time. I am still a huge fan of the record, having it marked as one of my favorites that goes everywhere on all my i-devices.
Posted by Martin Maenza at 4:30 AM