Ozzy Osbourne - Speak of the Devil 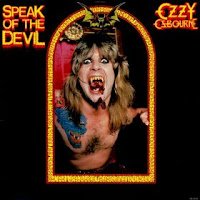 Today (November 27th) marks the thirtieth anniversary of Speak of the Devil, a live concert album by Ozzy Osbourne. What is interesting about this 1982 double-record release is that Osbourne chose to do all tracks from his days in Black Sabbath the decade prior. The album charted at number 14 on the US Billboard Hot 200, eventually going Platinum. In the UK, the album topped off at number 21 on the charts.

The record was mostly culled from recordings done at the Ritz in New York City on September 26th and 27th in 1982. Three of the tracks came from rehearsals with crowd noise added during the post-production.


Side one starts with "Symptom of the Universe", from the 1975 album Sabotage. From the opening crowd chants, you can tell that they came to hear Ozzy do these classics.

"Black Sabbath" comes from the 1970 album of the same name. Ozzy indicates in the banter to the crowd that this was the first song he ever wrote.

Side two kicks off with a pair of tracks that first appeared on 1970's Paranoid. “"Fairies Wear Boots" is first, followed by "War Pigs".

And from Black Sabbath comes "The Wizard", a track he had not played live since 1972. I do like the harmonica on this one; it gives the song more of a blues-metal sound.

"Sweet Leaf" first appeared on 1971's Master of Reality. By this point and with the previous track, Ozzy seems like he’s just ticking tunes off a list. It could be too that he was pretty wasted while performing. Or perhaps a little of both.

"Never Say Die" comes from the 1978 album of the same name, Osbourne's final with the group. The opening really reminds me the debut album by Boston for some reason.

Side four begins with "Sabbath Bloody Sabbath", the title track of the 1973 album by the band.

Next is a combined track "Iron Man"/"Children of the Grave" which blends tracks from Paranoid and Master of Reality respectively.

The album closes with "Paranoid" from the album of the same name. This is definitely the encore of the show and a great note to end things on.

I am kind of on the fence here with Speak of the Devil. On one hand, Ozzy is the first person I think of when I think of Black Sabbath and I am fairly familiar with his solo work in the early 80’s. And this concert shows how much of a master showman he is.

By the same token, having him do a full album of Sabbath classics with a different but highly competent band (Brad Gillis on guitar, Rudy Sarzo on bass and Tommy Aldridge on drums), is the message he is trying convey that he was the key to the Sabbath’s success? I think there are a number of Sabbath fans who would be less inclined to discount the contributions of Tony Iommi, Geezer Butler and Bill Ward.

Still, one must suspect the timing of this release - something thrown together from two months prior and put out just before Sabbath put out their own live album Live Evil, featuring Ronnie James Dio on vocals. I seriously doubt that was a coincidence.
Posted by Martin Maenza at 4:30 AM