Donnie Iris - The High and The Mighty 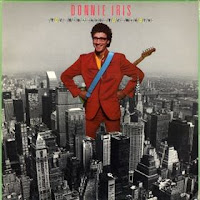 During the 70's, the Pennsylvania born rocker Donnie Iris was part of the Jaggerz and Wild Cherry before going solo in 1980. Today we are celebrating the thirtieth anniversary of The High and the Mighty, the third solo album from him and the Cruisers. This release, however, barely pierced the US Billboard Hot 200, topping out at number 180.


Side one opens with "Tough World", the first single from the album. The song only got to number 57 on the US Billboard Hot 100 yet did slightly better (number 26) on the Mainstream Rock chart. The lyrics take a “suck it up and deal” viewpoint in the face of a relationship break-up. Mark Avsec’s synthesizers get a spotlight on this one.

"I Wanna Tell Her" is an up-beat pop-rock song about infatuation and finding the courage to act upon it.

"Glad All Over" was a big hit in 1964 for the Dave Clark Five. The cover here stays very true to the original with few subtle tweaks. I like the cascading heavy guitar riffs the band added.

"Parallel Time" opens with a quirky Rod Serling kind of narration, telling the tale of a guy who falls through a time-warp and ends up in a club in 2006. Surprisingly, the dances they do and music they listen to seems more like the classics of the 1960’s. Ah, Donnie, if only you knew in 1982 what would really become of music in 2006.

Side two begins with the title track "The High and the Mighty", which peaked at number 39 on the US Mainstream Rock chart. This raucous anthem opens with a march drumbeat by Kevin Valentine and features some great screaming guitars by Marty Hoenes and Albritton McClain.

"This Time It Must Be Love" features some rocking horns and a bounce along beat.

"Love Is Magic" is a fairly straight forward rock love song with not a lot of surprises musically or lyrically. It does its job filling in the back side of the record.

"You're Gonna Miss Me" closes the album with a strutting guitar/drum rhythm. Iris passionately proclaims that this break-up will be a big loss for the girl, almost to the point where he is trying to convince himself of the fact.

The High and The Mighty is a good, middle of the road album. While it may lack any break-out hits, I think that is part of the charm. The songs are solidly constructed and well-performed. They definitely that have not been overplayed in the past thirty years that you find yourself tired of them. Unfortunately, finding most of these tracks digital poses a problem (I had to rely on YouTube for most of this review). Except for a couple on Donnie Iris’ greatest hits collection, the others are pretty scarce. I am definitely a firm believer that now in the digital age there is no excuse for things to go out of availability. I subscribe to the thought that every record has fans out there somewhere.
Posted by Martin Maenza at 4:30 AM