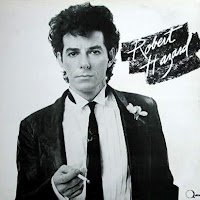 Hailing from Philadelphia, Pennsylvania, Robert Rimato changed his name to the stage name of “Robert Hazard” to write and perform music. This late musician (he passed away in 2008) is probably most known as the writer of the song “Girls Just Wanna Have Fun” which was made famous when it was covered by Cyndi Lauper on her debut album.

Robert Hazard and the Heroes (Ken Bernard on drums, John Lilley on guitar, Rob Miller on bass/vocals, Michael Pilla on guitar/vocals, and Jerry Weindel on keyboards) were big on the Philadelphia music scene in the late 70’s, but it took a number of years before the record labels and the rest of America to come to appreciate their sound.


Some of Hazard’s earliest new-wave hits came from his self-titled 1982 debut EP, made popular thanks to some music videos in the early days of MTV. Today we celebrate the thirtieth anniversary of this release.

Side one opens with “Escalator of Life”, the song that introduced me to Hazard back in 1982. The synth-heavy commentary on copycat consumerism featured a fantastic dance beat. I had heard the track on the local college radio station that fall and became an instant fan. This one was the reason I ran out to my local record store and picked up Robert Hazard on vinyl.

“Change Reaction” features a similar synth-guitar sound and a catchy chorus. It definitely has a bit of a Cars feel to it musically, and thus right in line with the new-wave rock that was playing over the airwaves at the time.

Side two begins with the rapid-fire rhythm of “Hang Around With You”. Hazard gives a great edge to his vocals for this one, and I really like the bass solo midway through. The lyrics tell of an obsessed guy, willing to give up everything just to be near a certain woman.

The rebellious “Out of the Blue” is the next track.

The record closes with Hazard‘s cover of Bob Dylan‘s 1963 hit “Blowin’ in the Wind”. This version takes the classic protest song and spins it with a punk flavor for a modern audience.

Back in the early 80's, I owned a copy of this EP on vinyl. I had heard the first track on the local college radio station and loved it, thus prompting my purchasing the record.
Posted by Martin Maenza at 4:30 AM