Joe Walsh - There Goes the Neighborhood 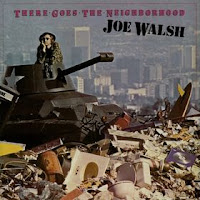 Happy sixty-fifth birthday today (November 20th) to American singer-songwriter Joe Walsh. As a member of three bands (the James Gang, Barnstorm, and the Eagles) as well as a successful solo artist and session musician, he has been recognized by Rolling Stone magazine as number 54 on its list of the 100 Greatest Guitarists of All-Time.

On May 15th of 1981, Walsh released his fifth studio album There Goes the Neighborhood. It reached number 20 on the US Billboard Album chart (with an eighteen week total time on the chart) and generated a trio of popular tracks on the US Mainstream Rock charts.


Side one begins with “Things”, a track that peaked at number 36 on the Mainstream Rock charts. The song has a slow, steady beat by drummer Joe Vitale. Fellow Eagles member Timothy B. Schmit provides backing vocals on this mellow, stuff-just-happen tune.

“Made Your Mind Up” has a light, bouncy pop-piano rhythm.

“Down on the Farm” has that down-home sound thanks to David Lindley on the violin. The lyrics tell of unrest by the animals and what happens when they thrown a barn-bash.

“Rivers (Of the Hidden Funk)” went to number 35 on the Mainstream Rock charts. It was originally written for the Eagles’ 1979 album The Long Run by Walsh and guitarist Don Felder. It did not make the final cut of that record, so Felder gave Walsh an assist on the recorded version here. The guitar work here meanders like a channel of water flowing across the countryside while the lyrics speak to waiting out a depressing mood.

Side two opens with “A Life of Illusion”. This number 1 Mainstream Rock single crossed over to the US Billboard Hot 100 where it peaked at number 34. The song was originally recorded by Walsh with Barnstorm back in 1973, but it was overdubbed and remixed for this album. I can remember this mid-tempo track playing a lot on the album-oriented rock station I listened to in the early 80’s while in high school. It has a pleasant rhythm and supportive brass section, giving it a slight mariachi sound.

“Bones” has a blues feel, thanks to Walsh’s classic guitar playing and the piano rolls.

“Rockets” is a very mellow song about a love relationship that has fallen apart.

The final track “You Never Know” includes lyrics focusing on rumors and hearsay particularly targeted at other members of the Eagles and their management. This one has a funky rhythm to it with lighter soul percussion beat. A few years earlier, with a few tweaks, and the song could almost have passed for a disco tune.

For me, There Goes the Neighborhood is a cookie-cutter kind of record. Many of the songs have a similar, slower tempo to them which makes them blur into an indistinctive haze. The opening and closing of the second side are really the only saving graces, but are they enough to endure the rest? Slightly.
Posted by Martin Maenza at 4:30 AM