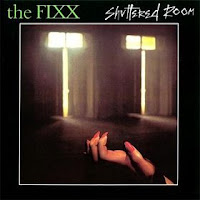 This month marks the thirtieth anniversary of Shuttered Room, the debut album from the British new-wave band the Fixx. The group was made up of lead singer Cy Curnin, keyboardist Rupert Greenall, guitarist Jamie West-Oram, bassist Charlie Barrett and drummer Adam Woods.

The album charted at number 77 in Australia, number 54 in the UK, and number 52 in Canada. In the US, its highest chart position was number 106 on the Billboard Hot 200.


Side one opens with “I Found You”, the B-side to the promo single. The beat is urgent, building into an up-tempo frenzy.

“Some People” was released as a promo single in early 1982 to get the band some exposure. The sound of this one is very Devo-ish to me, both in vocal inflections and sniping synth attitude.

Thanks to a video in heavy rotation on MTV, “Stand or Fall” was the single from the album that really helped put the band on the map. The track hit number 54 in the UK, number 37 in Canada and number 33 in Australia. In the US, it stalled at number 76 on the Billboard Hot 100 yet soared to number 7 on the Mainstream Rock chart. The opening of this one is rather haunting with the chiming guitars and the wind-blown synth in the distance. The lyrics were perfect for the Cold War era of the early 80’s.

“The Strain” was the B-side to the previous track’s single. The lyrics move back to a more mundane view again, but there are a number of decent musical hooks in this one to keep it interesting.

“Red Skies” continued the group’s chart momentum; it reached number 44 in the Netherlands, number 57 in the UK, number 101 on the US Billboard charts and number 13 on the US Mainstream Rock charts. This one has another great opening and a solid beat. The lyrics warn of the coming of a nuclear holocaust and feature a sing-along hook in the chorus that any concert crowd could easily pick up.

Side two begins with “Lost Planes”, the first single released by the band in 1981. On it, the name of the group is spelled with a single ‘x’. It failed to make any noise on the world charts. Again, the track has a bit of a Devo flavor to it at the start but it quickly evolves into its own identity.

“Cameras in Paris” with a higher registered keyboard sequence gives this one a lofty element. The lyrics touch upon photographers recording the movements and activities of those wishing to find some privacy.

“I Live” has a bit of a jackhammer beat that is to the forefront at the start but slips to the background when the guitars and vocals are introduced. I kind of lost interest in this one part way through.

The title track “Shuttered Room” is next. I like the quick-step tempo of this one; it makes for an interesting song to dance to (where you just throw your head from side to side with a total disregard for everything and just get lost in the music).

The record closes with the tick-tock beat of “The Fool”, the story of a man imprisoned. There are a number of layers to this composition that keep it interesting.

Besides the two bigger hits, most of Shuttered Room escaped my notice. The Fixx was another of those groups that seemed very popular when I went to college in the fall of 1983. Listening to this whole album for the first time for this review, I see glimmers of potential in the other tracks however most are very much overshadowed by “Stand or Fall” and “Red Skies”.
Posted by Martin Maenza at 4:30 AM