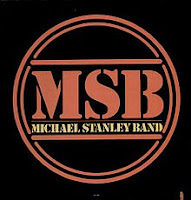 Hailing from Cleveland, OH, Michael Stanley Gee formed a group in 1974 to play heartland rock that was popular in the American Midwest.

In August of 1982, the Michael Stanley Band released MSB, their seventh studio album. The title came from the abbreviation of the group’s name that their fans often used. The album climbed to number 136 on the US Billboard Hot 200. Today we will look at that album to celebrate its thirtieth anniversary.


At the time of this record’s release, the line of the band consisted of Michael Stanley (guitar, vocals), Tommy Dobeck (drums), Bob Pelander (keyboards), Kevin Raleigh (keyboards, vocals), Michael Sismondi (bass) and Rick Bell (saxophone). This would be the final album for the group that included Gary Markasky on lead guitar. The songwriting credits for the ten tracks were mostly split between Stanley and Raleigh.

Side one begins “In Between the Lines”, which also served as the B-side to the first single. It hits you right at the start with the pounding pianos of Pelander and the searing sax of Bell. Stanley has stated that he wrote this one as a farewell tribute to John Lennon who was murdered in late 1980. The song has a great energy level and opens the album on a very strong note.

“If You Love Me” keeps the tempo up and rocking. This one has a clap-along beat that is good for dancing to.

“Night By Night” was co-written by Stanley and the song writing duo of Walter Becker and Donald Fagen. The mid-tempo track pays tribute to the classic doo wop rock of the late 50‘s and early 60‘s.

“When I’m Holding You Tight”, the first single from the record, went to number 78 on the US Billboard Hot 100. This one celebrates those feelings that come being close with the one that you love.

“Spanish Nights” closes the side with a beautiful ballad of lost love set in the backdrop of Los Angeles. The song sounds like something Bruce Springsteen would have done; Stanley gets that same kind of vocal timbre going here.

Side two starts with a saxophone solo on “One of Those Dreams”. Raleigh’s tenor vocals are also a key feature of this track which he wrote.

“Love Hurts” picks the tempo back up with a decent toe-tapper. The lyrics are a pretty straightforward statement of how difficult relationships can be sometimes.

“Hang Tough” is one of those pep talk kinds of songs, in this case how to stay strong despite adversities encountered. The guitar hooks are catchy and percussion is pulsating.

The B-side to the second single was “Just a Little Bit Longer”.

The album closes with the second single “Take the Time”; it went to number 81 on the US Billboard Hot 100. Stanley co-wrote this one with Mick Ralphs, a founding member of Mott the Hoople and Bad Company. The lyrics warn of making hasty decisions when it comes to life and love. I really like the feel and message of this one.

While I was familiar with the Michael Stanley band and, in particular, their fifth album Heartland, I had not heard MSB in its entirety until doing this review. I found the record to be very pleasant with some real standout tracks. Had I run across this one thirty years ago, I am sure it would have gotten a lot of play on my turntable. I am definitely going to rectify that situation ASAP by adding some of these tracks to my digital music library.

I am surprised MSB did not do better on the charts than it did. Then again, as my blog has shown so far these past eight months, there was a lot of competition on the music scene in 1982.
Posted by Martin Maenza at 4:30 AM

I do, however, need to correct a few items ... Mick Ralphs, Walter Becker, Donald Fagen had no participation in songwriting for MSB ... the noted songs were written by Michael himself.

Lookin' forward to more from you ... thanks!!