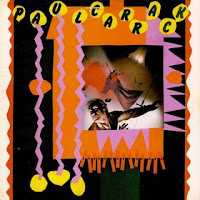 English musician, singer and songwriter Paul Carrack has worked along side numerous bands: Ace, Squeeze, Mike + the Mechanics, and Roxy Music to name but a few. In the early 1980’s, he embarked on a solo career.

This month marks the thirtieth anniversary of Suburban Voodoo, his second solo studio release. The album went to number 78 on the US Billboard Hot 200.


Side one opens with a “Lesson in Love”. As a popular track on the US Mainstream Rock stations, it charted there at number 33. I like the rollicking keyboards on this one.

“Always Better With You” is a realization that life was better being in a couple rather than being alone.

“I Need You” was co-written by Carrack and Nick Lowe. As a single, the song did well; it went to number 37 on the US Billboard Hot 100, number 30 in Australia, number 21 in the Netherlands and number 20 on the US Adult Contemporary charts. I can remember this one playing on the Top 40 radio I listened to during that summer between my junior and senior years of high school. When it comes on these days in my car, I end up singing along with Carrack.

“I’m in Love” has a classic Motown sound to its melody and percussion.

“Don’t Give My Heart a Break” was the B-side to the second single. The singer begs his love not to leave him.

The second single “A Little Unkind” failed to make much noise on the charts. While a pleasant enough pop song, it does not stand out from the rest of the pack here.

Side two starts with the rousing piano-rich “Out of Touch”, a number about having a disconnect with his girlfriend.

“What a Way to Go” includes touches of blues-rock in its rhythm. The songs main sentiment is clever - “you’re going to be the death of me, but what a way to go”.

I like the bass line of “So Right, So Wrong”; it really gives this one an interesting hook and helps it to rise above some of the other more filler tracks.

“From Now On” is a song about turning over a new leaf and making a total commitment to one single lover.

“Call Me Tonight” was the B-side to the single for “I Need You”. This one is interesting enough musically on its own, but Carrack’s tenor voice is just icing on the cake.

“I Found Love” keeps the tempo upbeat for the final cut on the album.

Paul Carrack crafted a solid pop record with Suburban Voodoo. The sound has a classic 60’s soul sensibility that makes it feel instantly familiar and comfortable. That was an interesting way to go in 1982 when much of the charts were moving towards newer, synth sounds. But Carrack reminds us why these kinds of love songs worked, by giving us wonderful melodies and rich arrangements.
Posted by Martin Maenza at 4:30 AM