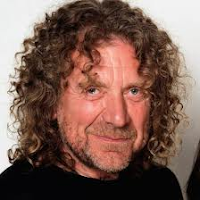 From magazines like Hit Parader to Rolling Stone, Plant is considered one of the greatest singers in rock and roll. Over his four decades in music, he has inspired the likes of Freey Mercury, Axl Rose, Geddy Lee, Ann Wilson, Sammy Hagar and more.


From the late 1960's to 1980, he was a key element to the Led Zeppelin sound. One example of that great catalog of work was Led Zeppelin IV (click here for my review of that album from 1971).

In 1982, he embarked on his solo career with Pictures at Eleven which I reviewed earlier this year (click here for that review).

Even after Zeppelin broke up, Plant continued to collaborate with guitarist Jimmy Page. One such project was 1984's The Honeydrippers volume 1, a homage to the early days of rock and roll (click here for my review of that album).

As the new millenium came upon us, Plant continued to work in various genres. From a blues-folk sound with the group Strange Sensation to bluegrass with Alison Krauss to rock with the Band of Joy, Plant shows no signs of retirement in sight. And for all us music fans, that is a good thing.
Posted by Martin Maenza at 4:30 AM