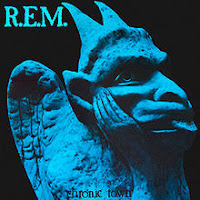 The Athens, Georgia, alternative band R.E.M. had some minor success in 1981 with their debut single “Radio Free Europe”. Their manager, however, did not feel they were quite ready for a full album release. Instead, he advised them to put out an EP. So, Michael Stipe, Bill Berry, Peter Buck and Mike Mills went to producer Mitch Easter’s Drive-In Studios in Winston-Salem, North Carolina, to record.


The result of those sessions is Chronic Town, the five song extended-play album that is celebrating its thirtieth anniversary release (August 24, 1982) this week. The original vinyl release had the first side labeled as “Chronic Town” with the second side labeled “Poster Torn”.

Side one opens with “Wolves, Lower”, a song with an anxious, paranoid edge to it musically. The lyrics hint to illicit behavior that would prompt townsfolk to form a mob to enact punishment. R.E.M. filmed a music video for this track to help promote the release.

The vocals on “Gardening at Night” are a bit difficult to decipher unless you listen carefully. Even looking at them on the internet, I am still lost. That’s par for the course with me and early R.E.M. songs. Be that as it may, I found the music to be very poppy and positive.

“Carnival of Sorts (Box Cars)” opens with a Kaliope riff. This one I am actually familiar with, for the chorus is one I know. Either I heard it back in the day on college radio where R.E.M. was building its initial fan base or in more recent years on satellite radio stations like Sirius/XM 1st Wave.

Side two begins with “1,000,000”. The guitar riffs remind me a little of early day Beatles. The lyrics, this time dealing with graves and secrets, have me stymied.

The last track is “Stumble”. The percussion periodically changes up to simulate that kind of stumbling motion.

The EP was released as part of the CD edition of the band’s 1987 compilation album Dead Letter Office. In 1995, it was included in a three CD box set sold in the UK under the title The Originals along with Murmur and Reckoning (click here and here respectively for my reviews of those two albums).

Chronic Town is interesting to listen to in part to see the roots of this band and how they were evolving their sound in the early days.
Posted by Martin Maenza at 4:30 AM

I adore old REM, so this post takes me back in a good way.