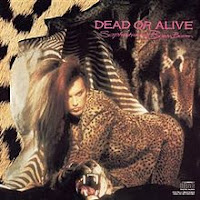 Burns was one of the founders of the UK dance band Dead Or Alive; he was the group's vocalist. The rest of the lineup at the time included Mike Percy on bass, Tim Lever on keyboards, Steve Coy on drums, and Wayne Hussey on guitar. After releasing a number of non-album tracks from 1980 to 1982, they signed to the Epic Records label. On April 27th of 1984, they released their first studio album Sophisticated Boom Boom. Co-produced by Zeus B. Held, it rose to number 29 on the UK charts.

Side one opens with the declaration "I'd Do Anything", backed by a slinky dance beat. As the third single, it showed a bit of improvement over its predecessors; it reached number 79 on the UK charts.

Next up is a cover of the KC and the Sunshine Band hit "That's the Way (I Like It)". After three slow moving singles in the UK, the release of this track by Dead Or Alive helped them break through. The single went to number 45 in Australia, number 23 in Ireland, number 22 in the UK and number 28 on the US Billboard Dance Tracks chart. This version takes the 1975 disco classic and infuses it with 80’s electronic charm and raw sexual energy.

Coy‘s pounding percussion opens "Absolutely Nothing" before giving way to Lever’s keyboards. The lyrics paint a picture of romantic abandonment as one’s lover just up and leaves with no indication as to why. It leaves Burns with a longing that is barely filled with casual, meaningless encounters.

The second single "What I Want" only reached number 88 on the UK charts. I really like the echoing effects of the instruments and vocals on this one; it gives it a sense of urgency and excitement.

Lavish strings support the melodramatic "Far Too Hard", as the singer struggles to pull himself together after a romantic break-up.

Side two begins with "You Make Me Wanna". This one has a bouncy rhythm to it that is supported by the Kick Horns on brass.

As with the previous track, Burns punctuates his growling vocals with powerful grunts and groans on "Sit On It". They are matched by the horn bursts and the booming beats.

"Wish You Were Here" is another track about overwhelming desire. This one has a more obvious disco foundation to it. I find the chorus to be rather catchy thanks to the back-up vocalists.

"Misty Circles", the first single, stalled number 100 on the UK charts. The guitar work by Hussey and Percy standout particularly on this track.

The album does not let up the dance grooves, closing strongly with "Do It". While there is not much to this one lyrically, the star here is certainly the musical composition.

I became a fan of Dead Or Alive with their second album released in 1985. And although it would be a number of years later until I discovered their debut Sophisticated Boom Boom, it was definitely worth the wait. This first album established the 80’s dance club sound that the group would become famous for. It is definitely the kind of Euro-dance music I was into during my early college years - loud, booming, and easy to lose one‘s self in the music.
Posted by Martin Maenza at 4:30 AM