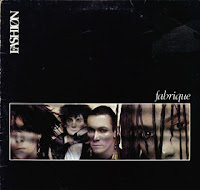 
Side one begins with “Move On”, which was released as a single early in 1982. It has a funky, synth groove to it that I could easily see in a deejay’s dance set right along side the likes of Heaven 17 and Duran Duran. The song has a great urban night-life feel to it.

The final single release from the album was “Love Shadow”; it peaked at number 51 on the UK charts. Recchi’s bass is in the forefront on this one, laying down the rhythm upon which the rest of the group follows. The additional musicians on this track include Gina Kikoine on the vox and Pete Willman on the base clavinet. This is the track by the group I was most familiar, having heard it on the local college radio station back in 1982 and having it show up on Rhino’s Just Can’t Get Enough compilation series of new wave tracks.

“Streetplayer - Mechanik” was the second track from the album released as a single; it went to number 46 on the UK charts. As with the first tracks on the record, this one’s very danceable sound is driven by the beats of Davis. The lyrics are full of confidence.

“Dressed to Kill” is up next with its look at, what else, fashion. Back in the early 80’s, the club scenes were very much about what you were wearing when you were out partying. By the time I went to college, I was shopping at some of the trendier stores at the local mall for what to wear when I went out dancing. Again, I am just so taken with Davis’ percussion and the guitar work of Harris and Recchi. Together they really created a solid Euro-funk sound.

The moody “You Only Left Your Picture” spotlights Mulligan’s synth skills. It definitely shows a different facet of the band. Listening to it with headphones on, I like the effect as the sound moves from one channel to another.

Side two starts with “Something in Your Picture”, the third track from the album to be released as a single.

“It’s Alright” has a nice bouncing swing to it with smooth vocal harmonies. The track has a much laid back attitude to it.

The next track “White Stuff (Short Cut)” was used in the second season opener of Miami Vice in the fall of 1985. The lyrics tell of a glamorous world of models and its seedy underside of drug usage.

The steamy, sultry “Do You Wanna Make Love” is next. Its blasé approach to it makes the song kind of refreshing and different.

The album closes with the ballad “Slow Blue”. Again, we see another facet to this band here. The guitar work is so sensual and intimate; it calls to mind Carlos Santana.

Listening to this entire album, thanks to people who posted the tracks on YouTube, for the first time for this review, I became an instant fan of the record. Fashion falls right into that 80’s UK sound that I was a big fan of back in my high school days; I love the band’s danceable rhythms.

Fabrique is another example of an album from the early 80’s that disappeared for a long time after its original vinyl and cassette release. At the turn of the century, the album was re-mastered for released on CD under the title The Height of Fashion, including five bonus remix tracks. This one is not currently available in digital form either. Luckily, I was able to find a copy of the CD release for sale on eBay for a reasonable price. I know that this album will be getting a lot of play on my iPod for many years to come.
Posted by Martin Maenza at 4:30 AM