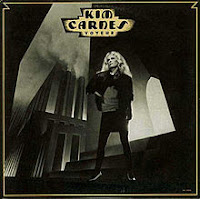 Following her smash hit album Mistaken Identity from the year prior (click here for my review of that one), Kim Carnes was ready to come back for more with Voyeur. As her seventh studio album, this August 1982 release did not live up to its predecessor’s reputation. In the US, it stopped its climb on the Billboard Hot 200 at number 49. It went to number 68 in the UK, number 26 in Canada and number 21 in Australia.


Side one opens with the title track and first single. “Voyeur” went to number 29 on the US Billboard Hot 100 and number 52 on the Billboard Dance charts. The single had mixed numbers around the globe: number 68 in the UK, number 45 in West Germany, number 23 in Canada, number 20 in Italy, number 12 in South Africa and number 10 in Sweden. The song did earn her a nomination for the Grammy award for Best Pop Performance Female in 1983 (she lost to Melissa Manchester). The music on this one has a very new-wave sound, but Carnes comes across as a little distant and stiff.

“Looker” was based on the closing theme of the Michael Crichton sci-fi film of the same name from the fall of 1981. The music here again has heavy synthesizer sounds but Carnes’ vocals bring forth a bit more emotion on this tale of a woman always on display.

“Say You Don’t Know Me” was released as a promo single in Canada, though it failed to make much noise. The track about encountering a former lover on the streets with their new partner has a more rocking sound. The synthesizers are played down, and instead it features strong percussion and a saxophone solo.

“Does It Make You Remember” was the second single in the US; it reached number 36 on the Billboard Hot 100. The tempo slows down for this mid-range ballad that showcases Carnes’ strong voice. Of the two released singles, I prefer this one over the album namesake.

“Breakin’ Away From Sanity” goes with a simple piano accompaniment as Carnes, backed by a choir of children, draws the listener into an emotional song about finding inner strength. It is simple but so powerful.

Side two starts off with “Undertow”. The song is a cry for help, to try and escape all those things in life that drag you under. Here the synthesizers work in concert with Carnes and not at cross-purposes.

The next track, “Merc Man”, is about a playboy with a Mercury cruiser that meets his match one Saturday night.

“The Arrangement”, the story of a woman who hires men for company and the guy who fell for her, features Martha Davis of the Motels on backing harmonies.

“The Trill of the Grill” is a rollicking number about a short order cook named Phyllis and the handsome stranger who catches her eye across the counter. This one has a lot of energy and is definitely one of my favorite tracks from this album. What a waste to be relegated to the B-side of the first single.

The closing track “Take It On the Chin” served as the B-side to the second single. The track has a steady beat and plenty of synthesizers, with Carnes catching her man in her car with another woman. She, of course, kicks him to the curb.

I did not own any of the singles from Voyeur back in 1982; I think by that point I was spending a lot more time listening to college radio rather than Top 40. Also, as it was my senior year of high school, I was hanging out more with friends rather then spending my weekend nights home alone listening to music. Overall, for me, this album is a bit of a mixed bag. Some of the songs work better than others. Still, Kim Carnes puts her best efforts into each of them.
Posted by Martin Maenza at 4:30 AM

Sounds good, I don't think I've never heard any of her other songs besides "Bettie Davis Eyes" One of my favorite songs! : )