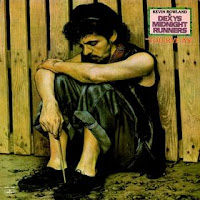 This month also marks the thirtieth anniversary of Too-Rye-Ay, the group’s second studio album. This August 1982 release went to number 22 in Norway and Sweden, number 14 on the US Billboard Hot 200, and number 2 in New Zealand and the UK. It produced a number of hit singles in the UK as well as the international smash hit for which the group is probably most known among 80’s music lovers.


The album was also included on the 1001 Albums You Must Hear Before You Die list.

Side one starts with “The Celtic Soul Brothers”. This single went to number 45 in the UK in 1982; upon re-release in 1983 it went to number 20 in the UK, number 13 in Ireland, and number 86 on the US Billboard Hot 100. Rowland has gone on record saying the song is about his friendship with trombone player Jimmy Paterson. The fiddles on are provided by Helen O’Hara and Steve Brennan, collectively known as “the Emerald Express”.

“Let’s Make This Precious” opens with the big horns of Paterson, Paul Speare and Brian Maurice. Together, they help to give the song a 60’s Stax soul sound. The lyrics make a commentary on present day music, calling some of it noisy and crude. The band would prefer to have something more pure and soul-bearing.

“All in All (This One Last Wild Waltz)” naturally has a slow, gliding 2/4 time. The lyrics are a farewell message to someone who clearly meant much in the man’s life, even if praise was never given. It makes me think of a son’s final words to a father who has died.

“Jackie Wilson Said (I’m in Heaven When You Smile)” was written by Van Morrison and featured on his sixth album Saint Dominic’s Preview in 1972. This revamped version by Dexys went to number 5 in the UK and number 16 in the Netherlands. I find it to be a pretty decent cover of a classic tune.

“Old” slows things down again with another gentle swaying number. The lyrics speak of the differences between generations, the old and the young. But some young find the wisdom and stories of their elders are things to learn from. It ends with a brief instrumental reprise of the first track of the side.

Side two opens with reverent tones of “Plan B” before exploding into something bigger. The lyrics are about being there and supportive for the ones you love. That track leads directly into the next one, “I’ll Show You”; this one reflects upon the trouble youth who grew up to live hard lives as adults.

“Liars A to E” is next. The lyrics seem to reflect a failed relationship of Rowland’s (he even references himself by name in the song).

“Until I Believe in My Soul” is the longest track at over seven minutes in length. It opens with a single whistle, followed by Rowland’s falsetto accompanied by backing singers “The Sisters of Scarlet” (Carol Kenyon, Katie Kissoon and Sam Brown). I like the jazzy swing that kicks in about a third of the way through, just to change things up a bit.

The final track is “Come on Eileen”, the biggest hit of the group’s career. The song went to number 1 in the Australia, Ireland and the UK. In the US, it went to number 31 on the Adult Contemporary chart, number 6 on the Mainstream Rock chart, and number 1 on the US Billboard Hot 100. The fiddle and steady drumbeat opening was like someone ringing the dinner bell in my neighborhood growing up; both signified the start of something good. The lyrics are a play for the singer to get a young lass to sleep with him. The album gets its title from one of the repeated phrases in this song.

I owned a copy of the final song on a 45 back in early 1983 when it was popular here in the US. It was a favorite of mine then and still remains so today. Despite how much I liked that one by Dexys Midnight Runners and the accompanying video, I never felt inclined to seek out the entire album.

However, listening to all of Too-Rye-Ay today, I can definitely see lots of elements that I find enjoyable. The horns and the 60’s soul elements give the record an instant familiar feel that tugs at the nostalgia strings. It definitely was different than a lot of the music I was listening to during my final high school year, and that would have made it stand out from the pack. A few more tracks from here will definitely be joining my music library in the very near future.
Posted by Martin Maenza at 4:30 AM