Shania Twain - Come On Over 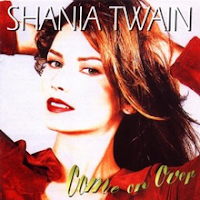 On November 4, 1997, she released Come On Over, her third studio album. This album, co-produced by her husband at the time "Mutt" Lange, went multi-Platinum the world over and has sold more than 40 million copies to date.


It was also a chart-topper, going to number 2 on the US Billboard Hot 200, and number 1 in Argentina, Canada (both pop and country charts), Australia, New Zealand, Ireland, the UK, Norway, Belgium, Denmark, and the Netherlands. In the US, it debuted at the number 1 spot on the Billboard Country charts and held that spot for fifty non-consecutive weeks; it spent a total of 151 weeks in the top 10 of that chart. The singles from this album filled the charts from 1997 to the end of the decade. It certainly earned its place as the best-selling country music album and the best-selling studio album by a female act in the 20th century.

The album opens with the declarative "Man! I Feel Like a Woman!" This seventh single, which won the Grammy for Best Female Country Vocal Performance in 2000, was a huge hit. It went to number 33 in Germany, number 20 in Sweden, number 23 on the US Billboard Hot 100, number 18 on Canada's pop charts, number 16 in Belgium, number 11 in Austria, number 10 in the Netherlands, number 3 in Australia and the UK. The music video is noted for doing a role-reversal homage to Robert Palmer's 80's classic "Addicted to Love". I always liked the energy in this female empowering song.

"Love Gets Me Every Time", the first single, went to number 1 on both the US and Canadian Country charts; it also went to number 25 on the US Billboard Hot 100. The lyrics talk of falling in love whenever you are least expecting it.

"Don't Be Stupid (You Know I Love You)", the second single, also topped the Canadian Country charts. In the US, it went to number 6 on the country charts and stalled at number 40 on the Hot 100. The sentiment here is that a man should trust his lovely girlfriend is not going to cheat on him.

It is time to slow things down with a ballad. "From This Moment On" is a duet with American country singer Bryan White. This was released as the fourth single from the album; it topped both the Canadian Country and Adult Contemporary charts as well as hitting number 1 on the US Adult Contemporary chart. The song has a much more pop sound thanks to the rich string section performed by Carl Marsh.

"Come On Over" charted as a single in 1999; it reached number 1 on the Canadian Country charts and 6 on the US Country charts. It won the Grammy Award for Best Country Song in 2000. The music has touches of Zydeco to its welcoming swing.

"Whatever You Do! Don't!" is about a woman so flustered by a man that she is worried she’ll lose complete control. The guitars and fiddles create a great bit of tension musically.

Twain continues to dispense advice to unsophisticated guys on "If You Wanna Touch Her, Ask!" Consider it a down-home version of Aretha’s “Respect”.

The third single "You're Still the One" was the first from the record to crossover from the country charts; it was a number 1 hit in Australia, and on the US and Canada's Adult Contemporary charts. This gentle ballad about an enduring relationship also topped the latter two's Country charts and won Twain Grammy awards in 1999 for Best Country Song and Best Female Vocal Country Performance.

"Honey, I'm Home", the sixth single, also topped the Canadian and US country charts. This is definitely my favorite track from the record, mostly because I would hear it nearly every Friday morning as part of a Raleigh radio station’s “Friday Morning Free-For-All”. This tune was to represent all the female listeners of the morning show. It has a great slinky dance beat.

"That Don't Impress Me Much", more of a pop-rock song, graced the Top 10 in nearly every market around the globe with most of those chart positions from 5 down to 1. The lyrics describe the trials and tribulations of dating high maintenance men who are so into their looks, cars or careers.

"Black Eyes, Blue Tears" is an up-tempo tune that deals with domestic abuse and a woman finding the strength to get out of a bad relationship.

"I Won’t Leave You Lonely" is about standing by someone in their time of need. Again, this one has Zydeco touches to it. Twain also mixes in a little French-Canadian at one point.

"Rock This Country!" indeed rocked the country charts as a single in 2000, going to number 30 in the US and number 3 in Canada. I bet this one was a big number when performed live.

The album closes on a softer note with one more ballad. This time it just Twain and a simple guitar and gentle percussion accompaniment. "You've Got a Way", the eighth single, went to number 49 on the US Billboard Hot 100, number 28 in Australia, number 17 on the Canadian Pop chart, and number 17 in New Zealand. It went to number 1 on the Canadian Country chart as well.

Sixteen tracks is a lot of music and this album clocks in at exactly an hour. It reminds me how artists started filling out CDs in the 90’s. Luckily, this album has very little filler.

By late 1999, many of the singles had appeared on the pop radio station which I listened to and from work. My wife asked me for ideas for Christmas gifts her family could get me, so I suggested Come On Over. Both my sister-in-law and I ended up getting copies that holiday. This was the one with the original, country mixes to most of the songs.

It has been a few years since I have given this one a spin. Given how many tracks from it were over-saturating the airwaves at the end of the 90’s, allowing some space may have been a good thing. Coming back to it again in 2012, I found I still enjoy this collection of late 90’s country-pop.
Posted by Martin Maenza at 4:30 AM