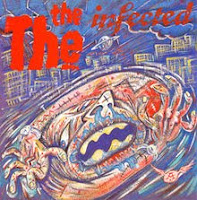 Happy fifty-first birthday today (August 15th) to Matt Johnson, English musician and founder of The The.

After a marginally successful debut album Soul Mining in 1983 (click here for my review), it took a few years before The The would release its next album. The 1986 release Infected went Gold in the UK. Its chart performance showed improvements over the debut; it made it to number 89 on the US Billboard Hot 200, number 46 in the Netherlands, number 20 in Sweden, number 14 in Norway and the UK, and number 12 in New Zealand.


The album also appeared on the 1001 Albums You Must Hear Before You Die list.

Side one opens with the title track. Released as the third single, "Infected" hit number 48 in the UK and number 24 in Australia. The opening percussion bounces from audio channel to audio channel, creating a great effect and getting you right into the groove of this song. The lyrics make reference to an STD transmitted between lovers.

"Out of the Blue (Into the Fire)" is an interesting composition, going from a stripped down almost show tune style to a heavier industrial rock grind and back again. It is a mix you wouldn’t think would work yet it does. The lyrics come from a place of hurt and rejection, and projecting those feelings to others.

"Heartland", as the second single, went to number 29 in the UK. The lyrics paint a picture of desolation and poverty as could be seen in the Midwest of the United States. The music mixes a rousing piano with strong percussion. The backing chorus and the harmonica solo are very nice touches to pull the whole mood together.

"Angels of Deception" closes the side with a statement on the cultural elements of greed and religion.

Side two starts with "Sweet Bird of Truth", the story of a pilot trying to save his plane while flying over Arabia. This first single went to number 88 on the UK charts. Again, a lot of diverse elements here - a cockpit radio, somber horns, a variety of percussion, snarling vocals.

"Slow Train to Dawn", the final single, features guest vocals by Neneh Cherry. Together, they deliver a smoldering song with plenty of sexual tension and a danceable beat. It went to number 64 in the UK and number 95 in Australia.

The use of horns and strings give "Twilight of a Champion" a jazzy, urban sound. This tale is one filled with crime and violence.

The album closes with "The Mercy Beat", a song about looking ahead to some hope and salvation. It brings the whole thematic elements of the record to a conclusion.

There is no denying that Matt Johnson is an amazing composer. The eight tracks here are varied and complex; with subsequent listens you will find yourself picking up more nuances in each one. And his vocal delivery is individual; he employs inflections to convey what others might do with powerful sweeping notes.

In some ways, Johnson reminds me a bit of Laurie Anderson, another singular artist with great vision. But where Anderson gets a bit too artsy for me at times, Johnson’s music is more approachable and ultimately more enjoyable.

Sadly, albums by The The were not fairly well known here in the US beyond the non-mainstream. Except for a song or two off the previous album Soul Mining that I had heard on college radio or rarely MTV, I was completely unaware of this music until a few years ago. The songs are more cerebral and less hook-laden, two things that commercial radio would have a hard time categorizing. But that can be a good thing. Every now and again, you need to have something in your collection that you can pull out that is different and intriguing. For me, Infected is one of those records.
Posted by Martin Maenza at 4:30 AM