Gang of Four - Songs of the Free 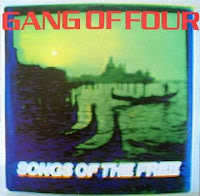 Earlier in 1982, the Gang of Four put out an EP called Another Day, Another Dollar (click here for my review). Months later, they followed it with Songs of the Free, their third full length studio album. This record only got as high as number 175 on the US Billboard Hot 200. In the band’s native UK, it faired a bit better by reaching number 61.

Side one begins with “Call Me Up”, a song about two opposing viewpoints. The harsh guitars further set the mood for the conflict. I would definitely categorize this one as a heavy metal-funk hybrid.

The album‘s single “I Love a Man in a Uniform” went to number 65 on the UK charts even though it was soon banned there due to the British war in the Falkland Islands at the time. In the US, it went to number 27 on the Billboard Dance charts. This track about military machismo was a favorite of mine back in late ‘82. I recorded the song onto a cassette when I heard it on the local college radio station back then. The bass driven groove and the backing vocals are really what sold it for me.

“We Live as We Dream, Alone” continues the strong dance beats while the lyrics provide a bleak commentary on the tendencies of isolation in the population.

“It Is Not Enough” features more amazing guitar work and some booming percussion by Burnham. The song is about nostalgia and clinging to the past. Gill ends up wailing solo by the end of the song.

“Life! It’s a Shame” gives more interesting sounds for the listener to feast upon. Gill comments on countries that take over others and use the resources to further their own coffers.

Side two begins with “I Will Be a Good Boy”, a song that comes from a place of a person too eager to please others. The instrumentation gives it a creepy, almost psycho tone.

“The History of the World” has an interesting rhythm to it, a bit slower and more methodic. The lyrics take on how the white men overtake countries and rewrite the history.

“Muscles for Brains” takes to task those that try to force their ways upon others. It is backed by a funky beat.

The album closes with the moody “Of the Instant” that tries to find the connections between sex and politics.

Critics and fans found Songs of the Free to be a departure from the group’s funk-punk roots. The sounds here are more approachable with a bit more commercial appeal to boot, which is really why I tend to like it more than some of their earlier work.
Posted by Martin Maenza at 4:30 AM