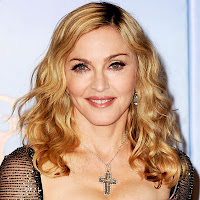 The Michigan born woman's road to becoming one the world's top-selling female recording artists of all time (with over 300 million records sold) began with her move to New York City in 1977 to become a modern dance professional. She also began performing with the group Breakfast Club, which led to her getting her own recording contract. The rest has been musical history.


Over the past year or so on my blog I have reviewed a number of albums that Madonna contributed to. In case you missed them, the links are below.

for the 1985 film soundtrack of Vision Quest, which included her first on-screen appearance, click here.

For the 1987 film soundtrack of Who's That Girl, which also starred the singer, click here.

For her 1989 released fourth studio album Like a Prayer, click here.
Posted by Martin Maenza at 4:30 AM

Email ThisBlogThis!Share to TwitterShare to FacebookShare to Pinterest
Labels: 80's, birthdays, celebrity, Like a Prayer, Madonna, music, Vision Quest, Who's That Girl