An Officer and a Gentleman (soundtrack) 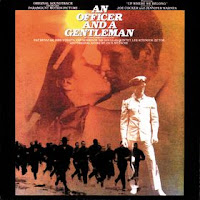 Welcome to another edition of Matinee Monday.

It was the middle of the summer of 1982 when Richard Gere and Debra Winger were heating up the movie screens in An Officer and a Gentleman, an American drama about a Navy aviation officer candidate (Gere) and a Marine Corps Gunnery Sergeant (played by Louis Gossett, Jr.). Winger played the love interest for Gere’s character.


The film grossed $3.3 million dollars in its opening weekend, the third highest film of 1982. Overall it made $129.7 million in domestic box office sales alone. Nominated for a number of Academy Awards, Gossett won for Best Supporting Actor and the film won for Best Music Original Song.

The soundtrack of the film, which included music by film composer Jack Nitzche, also did very well on the charts.

Side one opens with “The Main Title”, composed by Jack Nitzche and Buffy Sainte-Marie.

“Up Where We Belong” was recorded by Joe Cocker and Jennifer Warnes. Film producer Don Simpson argued that the song not be used in the film, saying “it is no good; it isn’t a hit”. Turns out, Simpson was totally off base. The duet went to number 14 in Austria, number 7 in Switzerland and the UK, number 6 in Germany, number 3 in many countries (Ireland, New Zealand, Norway and Sweden), number 2 in Canada and Spain, and number 1 in Australia. In the US, it hit number 3 on the Billboard Adult Contemporary chart and number 1 for three weeks on the Billboard Hot 100.

Will Jennings wrote up the lyrics to go with the Nitzche and Saint-Marie theme to produce a classic. This song was a huge slow dance favorite at high school dances, college parties and at the local bars for a number of years afterwards. I am pretty sure I even heard it at a few weddings I went to in that decade.

Van Morrison’s “Hungry for Your Love” is next. It first appeared on his 1978 album Wavelength. Morrison’s voice conveys the yearning of lovers separated by distance.

ZZ Top’s “Tush” was used in the film. It first appeared on the band’s 1975 album Fandango! and was the only single from that record. It went to number 20 on the US Billboard Hot 100 back then. The song is a popular one, having appeared in five films including this one.

Pat Benatar and “Treat Me Right” follows. The song is the opening track from her 1980 album Crimes of Passion (click here for my review of that record).

The Sir Douglas Quintet closes the side with “Be Real”, a track from their 1970 album 1+1+1=4. The song is a bluegrass country ditty about lovers being true to themselves and not trying to act like what they think their partner would prefer.

Side two opens with an instrumental replay of “Up Where We Belong”. I guess that must have stuck on Don Simpson’s craw, eh?

“Love Theme” is a five-minute instrumental by jazz guitarist Lee Ritenour. His playing is soft and sensual, matching perfectly that romantic moment in the film where it is used.

Dire Straits is next with “Tunnel of Love”. The song first appeared on their aptly titled 1981 album Making Movies. As a single it hit number 54 on the UK charts. The full eight minute cut appears on this soundtrack.

Nitzche and Sainte-Marie close out the record with the instrumental “The Morning After Love Theme”.
Posted by Martin Maenza at 4:29 AM