Aerosmith - Rock in a Hard Place 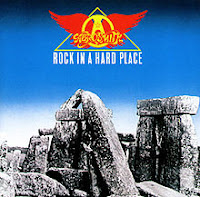 Today (August 1st) marks the thirtieth anniversary of the release of Rock in a Hard Place, the seventh studio album from the Boston rockers Aerosmith. Although it climbed to number 32 on the US Billboard Hot 200, it was the first of the group's albums to not achieve Platinum sales status. Guitarist Joe Perry did not play on this album. Brad Whitford, the group's rhythm guitarist, left the band during the making of the album as well (he only appears on one track). Could these two factors have had any influence on the sales figures? Perhaps.


Drummer Joey Kramer stated in his 2009 autobiography Hit Hard: A Story of Hitting Rock Bottom at the Top that "it's not a real Aerosmith record because it's just me, Steven and Tom...". Joining Kramer, bassist Tom Hamilton and lead singer Steven Tyler on this record were Jimmy Crespo (lead guitar, backing vocals) and Rick Dufay (rhythm guitar).

Side one explodes with the rapid-fire rhythms of “Jailbait". The guitars really scream on this rocker about dating an underage woman, starting the record off on a solid note.

"Lightning Strikes" was released as the first single from the album; it charted at number 21 on the US Billboard Rock chart. The track has a big dramatic opening before settling into its groove. The lyrics tell of gang violence on the big city streets where it is “kill or be killed”.

"Bitch's Brew" was released as a promotional single and thus did not chart. It tells the tale of a promiscuous young woman who has gotten herself into trouble.

I like the first line of "Bolivian Ragamuffin" even if it is a bit of an old fashioned statement. In fact, all the lyrics on this one have a bit of a tongue in cheek and mental stream of consciousness feel to them.

"Cry Me a River" is a popular American torch song written in 1953 by Arthur Hamilton and recorded in 1961 by Ella Fitzgerald. Joe Cocker recorded a rock version in 1970. Tyler and the boys keep with a more traditional jazz/blues take and opt for a subdued opening first verse and chorus. I rather like what they did with it.

Side two opens with "Prelude to Joanie". The lyrics, delivered in a hushed electronic voice, tell of the birth of a mythical creature. This leads right into the next track.

"Joanie's Butterfly" continues with an acoustic bohemian beat for the first half, then it turns to full on hard rock for the second half. I have read the lyrics; I have no clue where they were going with this one. It is like a drug-induced fantasy with erotica thrown in too.

We get back down to Earth on "Rock in a Hard Place (Cheshire Cat)", a straight-forward jam about a romp with a sexy woman. I like the guitar solo near the end on this one; it mirrors an orgasmic peak.

"Jig Is Up" sounds like a song you would hear in a strip club as the lyrics seem to be celebrating those kinds of ladies.

Tyler provides the harmonica opening on the album closer "Push Comes to Shove". Tyler then puts on an odd accent on the vocals for this bluesy number.

There is no doubt that Rock in a Hard Place does indeed rock. I wouldn’t expect anything less from the guys from Aerosmith. After listening to this one, I can definitely see why it had only a lukewarm reception in sales. It is a good record and carries on the band’s sound from the 70’s, but the lack of any real standout hits most likely made it very easy to be forgotten with all the other music that came out in 1982. In fact, as we’ve seen in the past six months here on the blog, the music scene was definitely changing. Aerosmith just had not yet gotten to the point where they were ready to adapt to a new decade.
Posted by Martin Maenza at 4:30 AM

This was the last great Aerosmith album. Why they disown this era just because two of the guys left the band is beyond me.

Kris, thanks so much for reading and the comment. I appreciate it.

I heard the sounds at the end of "Push Comes to Shove" are of a drunken Joe Perry yelling, breaking bottles, and shooting guns at cymbals. Anybody else ever hear this?