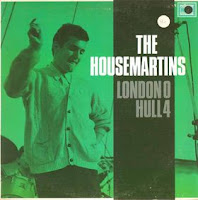 Happy forty-ninth birthday today (July 31st) to British DJ, musician and record producer Fatboy Slim. But before he gained popularity in the late 1990’s under that name, he was Norman Cook and the bassist and vocalist of the English indie pop band the Housemartins.

Formed in 1983 by Paul Heaton (vocals) and Stan Cullimore (guitar), the duo was soon joined by Ted Key (bass) and Justin Patrick (drums). Patrick was then replaced by Chris Lang, and Key left the group in 1985 to be replaced by Cook. Hugh Whitaker then replaced Lang, and this would be the line-up for the group‘s first album.

Side one kicks off with “Happy Hour”, a single which spent thirteen weeks on the UK charts and climbed all the way to number 3. It charted in the Netherlands (at number 25), New Zealand (at number 38) and in Ireland (at number 3); in the US, the song was popular on college radio stations. To contrast the up-tempo and peppy music, the lyrics point out chauvinism and pretense of the young British men trying to impress their bosses.

“Get Up Off Our Knees” plays off the divide between the wealthy class and the poor, where the former often look down on the latter as lazy and degenerate. The snappy piano based number gets your toes tapping while your mind is thinking over the message.

“Flag Day”, the first single by the group, was released a year prior in October 1985; it stalled at number 124 on the UK charts. They re-recorded the song for the album. The lyrics of this poignant ballad take to task those that think they are making a difference just by raising money for a cause. The band challenges them to roll up their sleeves and help out the poor directly.

“Anxious” has an edge to it, both in the guitar rhythms and the vocals. While the song was surely about the UK at the time, the lyrics are general enough that anyone can see meaning to them in their own lives and their own parts of the world.

The instrumental “Reverend’s Revenge” is next. At a minute and a half in length, it packs a lot of pop power. The harmonica playing on it is solid.

“Sitting on a Fence” is about those people who chose not to commit to any side of an issue, preferring to stay neutral and emotionally uninvolved.

Side two starts with “Sheep”, the second single from the group. In March of 1986, it got to number 56 on the UK charts. Lyrically, this one is about those people that just get led along through life without thinking for themselves, much like sheep on a mountainside going wherever their shepherd directs them.

“Over There” speaks of segregation of people into distinct groups.

Also released as a single, “Think for a Minute” went to number 18 in the UK and number 14 in Ireland. The picture painted here is of a people oppressed, with the simple joys of life all but vanished into thin air. Apathy has replaced every other emotion.

“We’re Not Deep” is a commentary on how the older generation at the time viewed the youth.

“Lean On Me” features a Gospel sound complete with a simple piano accompaniment. Heaton’s voice is outstanding on this track; his performance brings chills.

The album closes with the up-tempo “Freedom”, a song about graduating from school and releasing that many things that one was taught often came through the filtered viewpoint of the person doing the teaching.

The first time I ever heard a song by the Housemartins was a few years ago thanks to Sirius/XM’s 1st Wave channel. They often play the track “Happy Hour”. Listening to the entirety of London 0 Hull 4 for this review was a pure joy, to be able to discover something old that is so new to me. The music is well done and the lyrics are just as appropriate today as they were back in the mid-80’s. This album is definitely going on my to-purchase list.

If you are not familiar with this one, I strongly recommend you go to your favorite online music service and seek this one out for a listen - especially if you like pop music that makes you think.
Posted by Martin Maenza at 4:30 AM