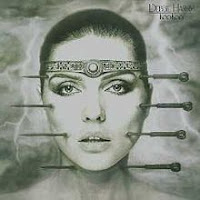 On July 27th, 1981, the famed lead singer of the new-wave rock band Blondie put out her first solo album KooKoo. This release scored very well on the charts, going to number 24 in Norway, number 17 in both Canada and New Zealand, number 7 in Sweden and number 6 in the UK. In the US, it went all the way to number 25 on the Billboard Album charts.

The tracks were produced by Nile Rodgers and Bernard Edwards, the successful team behind the 70’s group Chic. The duo worked with Harry and Chris Stein on the writing as well. Musically, the songs fused a number of styles (funk, rock, and dance) together into an intriguing package.

Side one starts with the diddling piano and infectious guitar riff of “Jump Jump”. Two of the members of Devo add to the backing vocals here.

“The Jam Was Moving”, the second single, only got as high as number 82 on the US Billboard Hot 100. Rodgers and Edwards contribute guitar on this one that they also penned. I’ve always liked the clap-along rhythm of this one, giving it an easy to pick up beat to click your heels to on the dance floor.

“Chrome” roars out like motorcycle on a winding road at night. Harry’s vocals are delivered in a seductive, come hither manner. The percussion has a bit of an exotic flavor to it.

The lyrics of “Surrender” have a healthy dose of sarcasm as Harry points out the many things she’ll do before she gives her love up to a man.

“Inner City Spillover” carries a Ska sound for the backdrop for this sorry urban tale.

Side two begins with funkified rhythms of “Backfired”. As the first single, it peaked at number 43 on the US Billboard Hot 100 and number 32 in the UK. It did a bit better on the US Dance charts as it went to number 29 there. The lyrics tell of a smooth player who tries to impress a lovely lady, only to end up coming across as just some average Joe. Rodgers provides the male vocals on this one, and Vinnie Della Rocca and Ray Maldonado give those groovy horns.

Things slow down a bit with the ballad “Now I Know You Know”. Harry’s higher vocal range adds a new dimension to the typical R&B slow-jams typically written by Edwards and Rodgers. I like the jazz touches at the end.

“Under Arrest”, the first of two Edwards/Harry/Rodgers/Stein collaborations, draws upon Blondie’s new-wave roots. It has a guitar-based rhythm to it.

“Military Rap” is one of my favorite tracks on the album, one on which Harry shows off her skills at rapping as she did years earlier on the Blondie hit “Rapture“. I love the rapid-fire rhythm set against the familiar bugle revelry.

“Oasis” is the other track written together by the four musicians. It has a decidedly Arabian spin to its mid-tempo disco rhythms. The album title comes from the lyrics of this one.

Back in 1981, I owned a copy of KooKoo on vinyl. I had become a fan of Debbie Harry and Blondie in the few years prior, and the dance aspects of the singles from this record appealed to me. It has probably been a good twenty years or more since I have listened to this album in its entirety (my vinyl is long since gone and I still need to pick this one up digitally). I find it to still be a decent record with a few classic cuts.
Posted by Martin Maenza at 4:30 AM