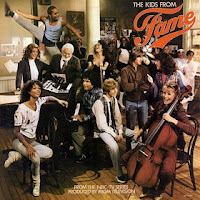 The show proved to be so popular that RCA Records released The Kids From “Fame” in July of 1982, the first of a number of albums with songs taken from the show. This month we celebrate the thirtieth anniversary of that record which went to number 1 on the UK album charts.


Side one starts with “Starmarker”, a beautiful piano ballad featuring all the cast paying tribute to a departing faculty member. As a single, this one went to number 3 on the UK charts in the fall of 1982.

“I Can Do Anything Better Than You Can” is a competitive number featuring Allen and Gimpel in a who-is-the-best back and forth. The music has a strong R&B dance tempo to it that is perfect for aerobic workouts.

Allen and Gimpel duet on “I Still Believe In Me”, another beautifully orchestrated ballad. The two voices really complimented one another.

“Life Is a Celebration” features Gimpel and Imperato on this inspirational, uplifting number. With the backing choir, it has a Gospel feel to it.

“Step Up to the Mike” closes the side with the entire cast in a fun, upbeat manner. Funny, as I type this, I have to wonder why the song wasn’t called “Step Up to the Mic” as that last word is short for microphone. Oh well.

Side two opens with “Hi-Fidelity” which as a single went to number 5 on the UK charts. This one is definitely my favorite track on this release; I love the synthesizers played by Curreri. Landsburg is the featured vocalist on this bouncy, up-tempo pop-rock tune; the actress-singer re-interpreted the song with Curreri in 2001 for her album Grown Up.

“We Got the Power” features a Latin percussion sound and a funky guitar groove. Anthony Ray and Gimpel, along with amazing backing vocalists, sing on this one.

Singer is the lead vocalist on “It’s Gonna Be a Long Night”, a gentle ballad that features acoustic guitar and piano.

Anthony Ray tells us the tale “Desdemona” with a little help from Landsburg and Imperato. It mixes Renaissance fair folk elements with a hard rocking production. Again, Curreri‘s synths are outstanding. Othello is actually one of my favorite plays from William Shakespeare, so I have always liked this musical tribute.

Landsburg and Curreri harmonize on the verses of “Be My Music” to be joined later by the rest of the cast on the chorus.

I was a huge fan of Fame, both the movie and the TV show. Musicals have always been favorites of mine. I had a copy of The Kids from “Fame” on vinyl back in 1982, bought at the local Record Giant store at the Plaza less than a half mile from my house. I played this one countless times, so much so that I can sing along with every one of the tracks.

Still a fan of this album, I was very pleased to be able to add digital versions of these songs to my music library a few years ago. Listening to it takes me right back to 1982 when I was very much like the kids on Fame, full of dreams and hopes for the future.
Posted by Martin Maenza at 4:30 AM