Huey Lewis and the News - Sports 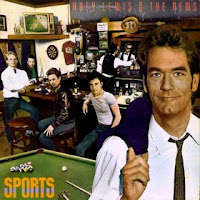 Sports hit record stores on September 15th, 1983, and has gone on to be the group's biggest selling album to date. The record went Platinum seven times over in the US and Diamond in Canada. Chart-wise, it went to number 40 in Sweden, number 29 in Germany, number 23 in the UK, number 19 in New Zealand, and number 6 in Norway. In North America, it topped out at number 3 in Canada and number 1 on the US Billboard Hot 200.


Thanks to five hit singles, the News was all over the radio over the next year or so. If you heard one of their songs and changed the dial right after it finished, you would likely to hear them again on another station within the hour or less. That is how much the music of this album was played and loved.

Side one is ushered in by the beating of "The Heart of Rock & Roll", followed by an intro played backwards on a piano. The third single, co-written by Lewis and Johnny Colla (who played guitar, saxophone and sang background vocals), reached number 78 in the UK, number 71 in Germany, number 58 in Australia, number 8 in Canada, and number 6 on the US Billboard Hot 100. This one gets me going right out of the gate; when I hear it I think of sun, fun, and people having a good time. Colla’s saxophone is very prominent on this one, adding to the unforgettable sound of the song. I can remember quite fondly how this tune was a big hit all over the college campus during my freshman year at RIT.

The first single was "Heart and Soul", a track written by Mike Chapman and Nicky Chinn and first recorded by Exile in 1981 for an album by the same name. The Bus Boys also recorded a version on their 1982 album American Worker. The News version went to number 61 in the UK, number 41 in New Zealand and the Netherlands, number 39 in Germany, number 25 in Australia, number 12 in Canada and number 8 on the US Billboard Hot 100. This one sounds great with the volume cranked up loud. The strong, solid beat upon which the rest of the song is built takes center stage.

“Bad Is Bad” comes in with a rather stripped down sound that works very well in its favor. The grinding guitars and the backing vocals create a smoldering, blues rhythm that I have always found very cool. Lewis also gets a chance to give us a harmonica solo here.

"I Want a New Drug" was released as the second single; it went to number 27 in both Australia and Germany, number 10 in New Zealand, number 6 in the UK and on the US Billboard Hot 100, and number 1 on the US Billboard Dance charts. Lead guitarist Chris Hayes co-wrote this one with Lewis and he included a searing guitar solo for himself to boot. This was another party favorite in 1983 and 1984 as it has a driving rhythm that is great for dancing.

A few years later, Weird Al Yankovic did a pitch-perfect parody of the song called “I Want a New Duck”.

Side two opens by "Walking on a Thin Line", the fifth and final single. It features a rather ominous, troubled tone to its opening. The serious song dealt with Vietnam War soldiers and their thoughts while being part of that military conflict. While it only hit number 70 in Australia, it went to number 18 on the US Billboard Hot 100 and number 16 on the US Mainstream Rock charts.

"Finally Found a Home" did just that as the B-side for the second single. The lyrics talk about growing up and realizing one’s place in the world that fits. For Lewis, that place is on stage and performing for people.

The fourth single "If This Is It", another Lewis/Colla collaboration. The song got to number 39 in the UK, number 37 in New Zealand, number 20 in Australia, number 10 in Sweden, number 8 in Norway and number 6 in Canada. In the US, it went to number 19 on the Mainstream Rock chart, number 6 on the Billboard Hot 100, and number 5 on the Adult Contemporary chart. This one has a back-and-forth swagger to it that instantly gets me into its sway. I like the backing vocal harmonies of the group that are prominent on this one.

"You Crack Me Up" served as the B-side to the first single. Lewis co-wrote this one with bassist Mario Cipollina. This one actually carries that new-wave feel from their earlier albums with the rapid-fire rhythm and keyboards/guitars blend. The lyrics tell of a woman who is trying to act younger than she is, to keep up with the pack. But Lewis and the boys have her number.

"Honky Tonk Blues" was a country and western hit for Hank Williams in 1952, going to number 2 on the US Billboard Country charts. Over the decades Charley Pride, the Nitty Gritty Dirt Band and others, had covered it. The News close out this album with their take on the classic, laying down a freight-train chugging blues riff that does not let up.

Along with the previous album Picture This, Sports made me a Huey Lewis and the News fan for life.

I can remember very clearly when I got my copy of this one on vinyl: it was Christmas day of 1983 and I was home from my first semester away at college. The first singles from the album had been burning up the charts that Fall, and many of the songs were must-plays at parties on campus and out at the local bars. I played this must-have from start to finish a ton over the next few years; it is one of those records that I know inside and out. I think every track is a gem.
Posted by Martin Maenza at 4:30 AM