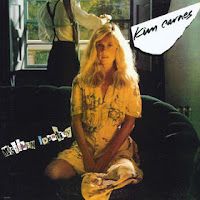 In April of 1981, Carnes released Mistaken Identity, her sixth studio album. It went to number 26 on the UK, number 4 in Canada, and number 2 in Australia. It spent four weeks at the number 1 spot of the US Billboard Album chart(from June 27th to July 24th that summer). The album earned Carnes nominations in two Grammy categories the following year - for Best Pop Female and for Album of the Year.


Side one begins with the smash hit single “Bette Davis Eyes”; it won the Grammy awards for Record of the Year and Song of the Year. As the first single from the record, it went to number 17 in New Zealand, number 10 in the UK and number 1 in Australia, France, Germany, Italy, Norway, Switzerland and Sweden,. In the US, it reached number 15 on the Adult Contemporary charts and spent nine weeks at number 1 on the US Billboard Hot 100 (five weeks starting on May 16th, then one week back at number 2 to make room for Stars On 45, followed by four more weeks again at number 1). I had this one on a 45, bought for ninety-nine cents at the local Record Giant store near my house, and played it all the time on my stereo during the later half of my high school years. I have always liked the percussion and keyboards on it.

“Hit and Run”, like the opening track, was written by the team of Donna Weiss and Jackie DeShannon. The lyrics liken a brief, unexpected love affair to an automobile accident. Waddy Wachtel plays the acoustic guitar on this one.

The title track “Mistaken Identity”, written by Carnes, is next. It was released as the third single, yet it only reached number 60 on the US Billboard Hot 100. The sound on this slow-tempo one is more of smoky, jazzy and mysterious. Jerry Peterson plays saxophone here.

“When I’m Away From You”, a song about the sadness that comes from being separated from the one you love, features Danny Kortchmar on acoustic guitar.

The second single from the record “Draw of the Cards” was a moderate hit. It got to number 64 in Australia, number 49 in the UK, number 42 in Canada, number 35 in West Germany, number 28 in the US, number 16 in Austria and number 13 in Switzerland. I had this one on a 45 as well though I had forgotten about it for a number of decades after I gave my vinyl to my brother. Rediscovering it again a year or so ago was like revisiting an old acquaintance from my past. I liked the hushed approach of the opening verses following by a more energy bridge. There is a cool electric guitar solo and some smooth sax accompaniment in this groove.

Side two opens with “Break the Rules Tonite (Out of School)”. This was one of those rare B-sides, this one to the second single, which I would listen to a lot. It has a great throw down rock sound, perfect for a cranking. It reminds me of a crowded, small-town bar on a Saturday night.

“Still Hold On” opens with a muted keyboard chord before being joined by vocals and guitars. One more, another strong saxophone solo by Peterson on this country rock track.

The gears shift to pop-rock with the mid-tempo “Don’t Call It Love”. The lyrics talk of how to categorize a relationship where the term love is not enough.

The B-side to the first single was “Miss You Tonite”, another track solely written by Carnes. The synthesized keyboards give this ballad a very early 80’s sound.

Carnes closes out the album at the piano for “My Old Pals”, a remembrance of old friends.

If you only know the hit first track, you hardly know the full offering here. Mistaken Identity is a solid record from start to finish, with tracks that fit Kim Carnes’ raspy vocal style.
Posted by Martin Maenza at 4:30 AM