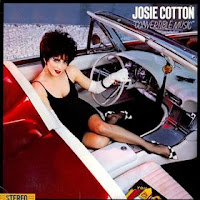 This month marks the thirtieth anniversary of the debut album Convertible Music by Josie Cotton. Born Kathleen Josey in Dallas, Texas, she sang with a number of bands before moving out to Los Angeles, California. In 1981, she recorded a debut single on the Bomp Records label and that, in turn, got her attention from Elektra Records who signed her. Chart-wise, the album went to number 147 on the US Billboard Hot 200.

A number of tracks from this album were picked up for the soundtrack of the 1983 film Valley Girl, and Cotton was even featured in the film’s prom scene singing them.


Side one opens with “He Could Be the One”. This second single went to number 74 on the US Billboard Hot 100 and number 34 on the Mainstream Rock charts. The song has a 60’s surf vibe to it thanks to the guitars of Bobby Paine and Pete McRae. The lyrics summon up that young female mindset when she considers the long-term potential of a guy.

“Rockin’ Love” continues that retro vibe with J.B. Frank’s keyboards. The song has a clap-along beat that is easy to dance to.

“Waitin’ For Your Love” is the first of six tracks penned by Cotton herself. It has a smooth, seductive strut to it. You can almost see her pacing about her room in some baby-doll nightie on a hot, steamy night just waiting for her lover to arrive.

“So Close” kicks up the tempo again with another clap-along tune that bounces.

“I Need the Night, Tonight” once more allows Cotton to express a primal yearning, which she does quite well.

Side two poses the question “Johnny, Are You Queer?” This was the original single she did for Bomp; upon re-issue in 1982 it went to number 38 on the Billboard Dance charts. This song is a cult-classic to be sure. The lyrics are delivered in a straight-shooter way as a girl questions the orientation of the guy she is attracted to. Is it politically correct? No way. The 80’s weren’t about that at all. It is a fun song to dance to.

I love when songs like “Systematic Way” use words like that one - very SAT of her. Music can educate as well as entertain.

“Another Girl”, with its slow and probing beat thanks to Gary Ferguson on drums, looks at the situation of infidelity.

“Bye, Bye Baby” is a fitting follow up, as the girl confidently cuts her man loose.

“No Pictures of Dad” is a heartbreaking ballad about a young girl who no longer has a father in her life.

The album closes out with a cover of “Tell Him”. The song was written by Bert Berns in 1962 and first his the charts in 1963 when the Exciters took it all the way to number 4 on the US Billboard Hot 100. The song has since been covered by greats like Dusty Springfield and Linda Ronstadt; Vonda Sheppard’s version was a critical part of a number of episodes of Ally McBeal. Cotton’s version is a quintessential new-wave take.

In 1982, I was first exposed to Josie Cotton’s music thanks to the local college radio station. They played both the singles quite a bit. I like how Cotton and her band were able to mix 60’s retro with the new-wave sounds of the early 80’s. In 1990, I picked up a new-wave compilation set on CD that included both the songs. It wasn’t until just two years ago that I was able to discover the rest of Convertible Music via digital downloads. I was an instant fan upon the very first listen.
Posted by Martin Maenza at 4:30 AM