DeBarge - All This Love 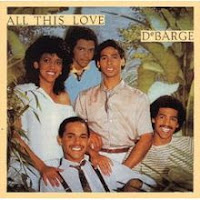 This month marks the thirtieth anniversary of the release of All This Love, the second studio album from DeBarge. Hailing from Detroit, Michigan, the DeBarge family was successful on the Motown Records label in the early 80's. The group was made up of siblings Etterlene ("Bunny") on vocals, Mark ("Marty") on trumpet and saxophone, William ("Randy") on bass, Eldra ("El") on vocals and keyboards, and James on keyboards. They were also supported by a number of studio musicians.


The July of 1982 release achieved Gold sales status, reaching number 24 on the US Billboard Hot 200 and number 3 on the R&B charts. It also generated a trio of singles, two of which crossed over from success on the R&B chart to the Top 40 pop chart. Seven of the eight songs on the record were written by members of the group.

Side one begins with a funky groove and the declaration "I'll Never Fall in Love Again". The lyrics tell of a woman who deceived her man into thinking he was the only one in her life. But a slip in the bedroom changed all that. I love the energy on this easy-to-dance to tune.

The party continues right into the next track. "Stop! Don't Tease Me" was chosen as the first single from the album. It failed to chart on the US Billboard Hot 100, but it did reach number 46 on the R&B charts. While I like the groove on this one too, I actually think the first track would have made for a better debut single as it is just a bit stronger of a song.

It is time to slow the tempo down a bit. The second single "I Like It" gave the group their first chart crossover; it went to number 31 on the US Billboard Hot 100 while scoring a number 2 on the R&B charts. El’s falsetto vocals are on the center stage here, and he moves to and from it with apparent ease.

"Can't Stop" closes out the first side with another unstoppable groove. It features a driving beat and thundering keyboards.

Side two opens with the title track "All This Love". The gentle swaying ballad was the third single from the album and the most successful of the trio; it went to number 17 on the US Billboard Hot 100, number 5 on the R&B chart, and number 1 on the Adult Contemporary chart. The guitar solo on this slow-dance staple is provided by the great José Feliciano.

"It's Getting Stronger" has a disco sound carried over from the end of the previous decade. Bunny shares lead vocals with El on this one; their voices compliment one another quite well. Marty rounds it out with a strong saxophone solo.

Bunny takes the lead on "Life Begins With You", a beautiful love ballad that expresses how the right person can change one’s life.

The mid-tempo "I'm in Love with You" served as the B-side to the third single and closes out the record. The rhythm has an underlying Latin influence to it.
Posted by Martin Maenza at 4:30 AM