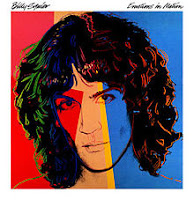 Today (July 23rd) marks the thirtieth anniversary of Emotions in Motion, the third studio album from rocker Billy Squier. Taking the momentum from 1981's Don't Say No (click here for my review of that record), this one continued his Platinum selling trend in the US and Canada. Chart-wise, it reached number 5 on the US Billboard Hot 200.

The album cover was created by renowned artist Andy Warhol. I think the red mark, with its angular shape, over his right eye makes me think he looks a bit like Paul Stanley of KISS.


Side one roars out of the gate with "Everybody Wants You", the first single from the album. It went to number 32 on the US Billboard Hot 100 and held number 1 spot for six weeks on the Mainstream Rock charts. In Canada, the single went to number 26. Its opening is a classic, with a steady drumbeat by Bobby Chouinard that sounds awesome with the volume cranked. And I love the stop-pause-go moments throughout the song. This one instantly takes me back to my final year of high school; it was a quintessential party track guaranteed to kick things in gear.

"Emotions in Motion" was released as the second single; it went to number 68 on the US Billboard Hot 100, number 20 on the US Rock charts, and number 13 on the Canadian charts. Freddie Mercury and Roger Taylor of Queen sang background vocals on this track; Squier was the opening act for them at the start of the promotional tour for this album. The varied guitar riffs layer nicely on this one, creating a winding and grinding groove.

"Learn How to Live" checked in on the US Rock charts at number 15. The slower intro is deceptive as its tempo picks up a bit with the first verse. The lyrics are a cautionary message, simply delivered with loud power chords.

"In Your Eyes" was the B-side to the third single. This ballad keeps it straightforward - mostly Squier and his acoustic guitar for the first verse with the rest of the band joining in for the rest. This one is very much for his screaming female fans, those girls in high school and college who considered the rocker a sex symbol.

The B-side to the first single was "Keep Me Satisfied"; it scored at number 46 on the US Rock charts. This tune features a quick-step, blues-rock rhythm that would be right at home with ZZ Top or Lynyrd Skynyrd.

The second side kicks off with "It Keeps You Rockin'", the B-side to the second single. Like an earlier track, this one utilizes the stop-go to its rhythm but here I find it a little jarring. Perhaps it is because the stop is done on an odd beat.

"One Good Woman" is about the search for one good woman, but the music clearly represents the sleazy stream he has to wade through to find her.

"She's a Runner", the third and final single, went to number 75 on the US Billboard Hot 100 and number 44 on the Rock charts. This song out of all of them here is the closest to a more new-wave/alternative rock sound thanks to Allan St. John’s synthesizers.

"Catch 22" is next. I like the added horn to this one, just to change things up a little bit to avoid things getting too same-sounding.

The album closes with "Listen to the Heartbeat". Here Squier again bemoans about the lack of true love in his life and how he needs pay attention to his heart over his head.

What Emotions in Motion might lack in lyrical poignancy, it makes up for with hard-rocking music by him and the band. There is no denying the sound generated by the four guitars (Squier, Kevin Osborn, Jeff Golub and bassist Doug Lubahn). So, if you are in the mood to just rock out, tracks from this one will certainly fit the bill nicely.
Posted by Martin Maenza at 4:30 AM