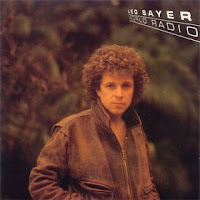 This month marks the thirtieth anniversary of the release of World Radio, the ninth studio album from English singer-songwriter Leo Sayer. This 1982 release hit number 35 in New Zealand, number 30 in the UK and number 4 in Norway.


Side one begins with “Heart (Stop Beating in Time)”, the second single from the album which reached number 22 on the UK charts. It was written by the Bee Gees (Barry, Robin and Maurice Gibb). This song, which pleads for a chance at love, has a rhythm that is slow yet precise.

Where the first track could easily have been released in the 70's when Sayer was riding the popular disco wave, this next track is firmly set in the 80's. "Paris Dies in the Morning" opens with a quick synthesizer riff that lays the foundation for the first verse.

Next, Sayer slows things down to pose the question “Have You Ever Been in Love?” This first single peaked at number 10 in the UK. With just piano accompaniment at the start, he is able to ring out the emotional hurt that can come when lovers are apart.

"Rumours", with the guitars and keyboards, has a sound reminiscent of early 80's Foreigner songs. Sayer even has a bit of Lou Gramm's gravelly vocal style going here.

"Heroes" is a slow, introspective number which looks to past influences, no longer around, for help in difficult times.

Side two starts off with “’Til You Let Your Heart Win”. This sentimental love ballad has a timeless sound to it. I like the saxophone accompaniment.

The B-side to the second single was “The End of the Game”. It opens with a low bass riff and a moody synthesizer sample. The lyrics tell of a relationship that has reached a critical point where both parties are ready to walk away from it.

“Wondering Where the Lions Are” was written and performed by Canadian singer-songwriter Bruce Cockburn, released as a single off of his 1979 album Dancing in the Dragon’s Jaws. Sayer's version stays pretty faithful to the original, tweaking the musical key only slightly and adding a little bit a synth to the mix.

"We've Got Ourselves in Love" is about the sudden realization that two very good friends have evolved into something more. This leads to a struggle between the head and the heart on how to proceed.

The title track "World Radio" closes out the album. It has a rich, vast orchestration to mirror its lyrical message about uniting the planet with music.

Leo Sayer put together a middle-of-the-road pop album here with World Radio. While there are no major clunkers among the ten tracks, there are also no landmark songs that continue to show up on classic radio stations.

I certainly do not recall any of these songs from my listening days of in high school. That, in some ways, makes it refreshing to hear three decades later as it was a completely new experience for me. There might be a few tracks I'll be looking to add to my music library some time down the road.
Posted by Martin Maenza at 4:30 AM