X - Under the Big Black Sun 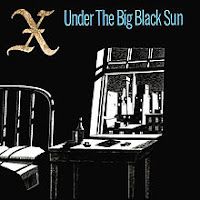 This month marks the thirtieth anniversary of the release of Under the Big Black Sun, the third album by the Los Angeles based punk band X. The quartet consisted of John Doe (bass and vocals), Exene Cervenka (vocals), Billy Zoom (guitar, saxophone and clarinet), and D.J. Bonebrake (drums and percussion).

The groups first two releases were done on a smaller, independent label with limited distribution. This July 1982 record was their major-label debut, and it climbed as high as number 76 on the US Billboard Hot 200.


Side one roars in with the insatiable passion and energy of "The Hungry Wolf". The guitar riffs from Doe and Zoom are catchy and engulfing.

The frenetic pace continues with "Motel Room in My Bed". The lyrics have a resigned attitude to them.

"Riding with Mary" tells of an affair between a married woman and her lover, but their clandestine meetings are not so private. The imagery includes a car and a small statue of the Virgin Mary on the dashboard. Growing up Catholic, this is something with which I was very familiar. My mother kept a religious medal near the dashboard of her car, and I distinctly remember having a plastic Jesus figurine in the Chevette, my first car. They were meant to keep us safe and in God's hands while we drove.

"Come Back to Me" is an interesting departure from the start of the record; this one abandons the punk heavy sound for a more classic rock melody. The lyrics deal with the death of a sibling and the mourning period days after the funeral. It is an interesting juxtaposition of music and theme.

"Under the Big Black Sun" brings back the themes of adultery, death and Catholic imagery from the earlier tracks before it. In fact, these last three songs were all influenced by the death of lead singer Cervenka's elder sister in an automobile accident in 1980.

Side two begins with "Because I Do", which tells of someone who married too soon and now feels their life is over. She wanders about like a pale specter, looking for someone new - someone to help them live again. As with a number of the other tracks, Bonebrake's drumbeats are relentless here.

"Blue Spark" is the track from this album I have been most familiar. It was part of an 80's new-wave/alternative compilation I got around 1990. The lyrics are short and simple, about a guy who only comes to life truly when his lover pays him a visit. Doe's lead vocals and the slower percussion make it too a standout musically from some of the others on this record.

"Dancing with Tears in My Eyes", a cover of a blues song by Huddy Ledbetter, is a bit sad in that the man finds little comfort with the woman in his arms. His heart longs for another, a former love. This one too has a different flavor musically, mixing in the tropical sounds of the marimba for percussion.

The band goes back to the punk sound they do so well with "Real Child of Hell". It is full of angst, attitude and alcohol - never a winning combination.

"How I (Learned My Lesson)" is a rapid-fire tune about a woman who continues to fall back on failed, former relationship with a man who is now a preacher at the local church.

"The Have Nots" closes the album with another more melodic rock song; I like the guitar work on this one. The lyrics tell the tale of a working class man who spends his nights at a local watering hole, drowning his sorrows and bemoaning his life.

I would not categorize Under the Big Black Sun as a completely depressing record, but the subject matter of these songs by X has a good bit of a downer theme. Be that as it may, I can certainly appreciate a few things here. First, the musicianship of the guys is very tight; I find all the songs very listenable and none sound so harsh that they become offending. Next up, the harmonies of Doe and Cervenka work very well together; it gives the songs of X a very distinctive quality. Finally, the lyrics are real, raw and honest; they are taken right from every day life - albeit the darker aspects of it.

This is definitely an album you should check out if you get the chance.
Posted by Martin Maenza at 4:30 AM

I was introduced to X in college and played More Fun in the New World over and over during those adventurous middle 80's. Love their sound and upbeat licks