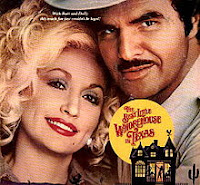 Thirty years ago this weekend (July 23rd, 1982), The Best Little Whorehouse in Texas made its big screen debut. Based on the musical of the same name, the major motion picture starred Dolly Parton, Burt Reynolds, Jim Nabors, Charles Durning, Dom DeLuise, and Robert Mandan. Durning was nominated for an Academy Award for Best Supporting Actor. The film and Parton were both nominated for Golden Globe awards.

The soundtrack album to the film was released on the same day.


Side one opens with Jim Nabors and the song “20 Fans”. It has a quaint music box opening before rolling into a rolling country narrative that opened the film. I’ve always found Nabors to be an interesting individual; his speaking voice and singing voice are like day and night. He would come on variety shows and belt out a number in that deep baritone voice. Amazing. Sadly, we get none of that here.

Dolly Parton is next with “A Lil’ Ole Bitty Pissant Country Place”. The music has a piano rag that drives this one that lays out all the rules of operation of the Chicken Ranch. It gets fun when the tempo moves into double-time and the girls are allowed to add their own limitations.

Parton and Reynolds duet on “Sneakin’ Around”, the shortest track at less than two minutes in length. This is just as well since Burt should stick to acting (Dolly does her best to carry the tune nonetheless).

Dom DeLuise croons out “Watchdog Report / Texas Has a Whorehouse in It”. He is backed by a gospel like choir.

The side closes with the instrumental “Courtyard Shag”. It features a number of musical themes juxtaposed; it works better at some times than others.

Side two begins with “The Aggie Song”, featuring a chorus of young males representing a Texas collegiate football team about to score a totally different way at the Chicken Ranch. Clocking in at close to eight minutes, this one clearly was a centerpiece number in the musical. Most of it is instrumental though so it loses a little in an audio only medium.

Charles Durning performs “The Sidestep”; he comes across well as a slippery politician as the Governor who keeps his affiliation with the bordello a secret.

Parton returns with “Hard Candy Christmas”. The country legend brings her heartfelt vocals to this ballad about looking for a hope for a better tomorrow. The song helps the record recover from a block of mediocre tracks in the middle.

The album closes with Parton reworking of her 1974 classic “I Will Always Love You”. This re-release went to number 1 on the US Billboard Country charts and crossed over to the pop charts as well (reaching number 53 on the US Billboard Hot 100 and number 17 on the Adult Contemporary charts). In Canada, it went to number 8 on the pop charts, number 2 on the Adult Contemporary charts and number 1 on the Country charts. It was likely this version that inspired Whitney Houston to record the song later in the decade.

I am trying my best to remember if I have ever seen all of The Best Little Whorehouse in Texas. My cousin and I often saw the various Burt Reynolds films in the local theater growing up, so that might have been the case here too. If not in the theatre, surely HBO ran this one a lot. Perhaps if I did see it, it is one of those memories that I just discarded after the fact.
Posted by Martin Maenza at 4:30 AM