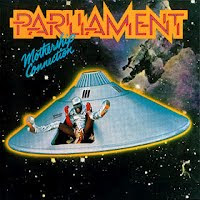 Welcome to another edition of Seventies Saturday. This weekend we also wish a very happy seventy-first birthday to George Clinton, born July 22nd in 1941.

Clinton and his Detroit-based funk super group Parliament released Mothership Connection, their fourth studio album, on December 15th, 1975. The Platinum selling record went to number 13 on the US Billboard Hot 200 and number 4 on the US R&B charts. It also generated a trio of R&B hit singles including their biggest crossover track.


The first side opens with “P. Funk (Wants to Get Funked Up)”. As the first single, it reached number 33 on the US R&B charts. The nearly eight-minute album version begins with a radio announcer advising that they have taken over the airwaves with a new funk sound. The band then interjects with their smooth jam on guitars, percussion, keyboards and horns.

“Mothership Connection (Star Child)”, the third single, went to number 26 on the US R&B charts. This track was the first appearance of Clinton’s interplanetary messiah alter ego Star Child. Like the album opener, this one is very laid back with a trippy jazz groove. The lyrics even quote the traditional spiritual “Swing Down, Chariot”.

The tempo kicks up with “Unfunky UFO” while carrying on the sci-fi themes of the record. Clinton has stated he was a big fan of Star Trek in the late 60’s and wanted to create a narrative about the Black people as space traveling pioneers.

Side two starts with “Supergroovalisticprosifunkstication”, a song whose title that reminds me of an urban Mary Poppins. I really like the synthesizers here by Bernie Worrell; he really creates some out of this world sounds. This one was released as the B-side to the third single from the album.

“Handcuffs” is actually a more down-to-earth song, in subject matter at least. A man questions whether he needs to keep his woman tied to the home to prevent her from creeping about town.

“Give Up the Funk (Tear the Roof Off the Sucker)” was the second single from the album. It is a signature Parliament tune that I am sure most folks have heard before. This party anthem went to number 5 on the R&B charts and number 15 on the US Billboard Hot 100. It features a few key vocal phrases that are repeated through out the song, with layers of repeated musical riffs. I remember this one being played on the radio and TV during the 70’s; it was and still is an iconic funk track.

The album closes with driving beats of “Night of the Thumpasorus Peoples”, which was also released as a B-side to the first single. There are no lyrics here, just some tribal chanting. It is really more about the music.

The Library of Congress has included the Mothership Connection in the National Recording Registry, stating that it provided a great influence on jazz, rock and dance music in the US. Rolling Stone magazine ranked it at number 274 on its list of the 500 Greatest Albums of All-Time. VH1 network named it the 55th greatest album of all time. It is also listed in the book 1001 Albums You Must Hear Before You Die.

As I mentioned before, some of these songs crossed over into the mainstream and have become iconic staples of funk music. I really like the musicianship on this one. Bootsy Collins does triple duty with guitars/bass, percussion and vocals. The horn section of Fred Wesley, Maceo Parker, and Michael and Randy Brecker is a wall of sonic sound. And, of course, George Clinton holds it all together as producer/ringmaster of this musical circus.
Posted by Martin Maenza at 4:30 AM